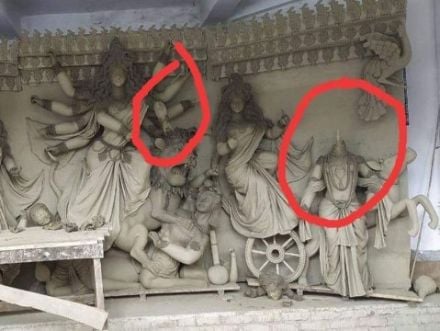 According to reports, unknown vandals smashed the murtis at the Kashipur Sarbajanin Durga Temple in Mehendiganj Upazila in Barisal, Bangladesh. The crime was reported early Sunday, according to Mehendiganj Police Officer in Charge Shafiqul Islam. He claimed that when people went to the temple in the morning to pray, they discovered the murtis defaced.

According to police, the event occurred in the early hours of the morning because people were present till 2 AM in the temple. “There are no CCTV cameras in the temple, and we have asked temple authorities to install the camera as soon as possible,” stated OC Shafiqul.

The leaders of Mehendiganj Puja Udjapon Parishad vehemently denounced the event and demanded that the perpetrators face legal consequences. Mehendiganj Upazila Nirbahi Officer (UNO) Nurunnabi inspected the location and issued orders to renovate the temple so that it could be used for worship.

1,682 murtis for the next Durga Puja have apparently already been moulded, and instructions have been given to install CCTV cameras at the Puja tents, according to the deputy inspector general of the Barisal Range Police.

Attacks on Hindu temples in Bangladesh

It is worth noting that there have been many incidents of attacks on Hindu temples in Bangladesh. Three madrasa students were detained by authorities on August 6 for allegedly damaging Hindu deity statues at the Kainmari Temple in Mongla Upazila in Bangladesh. The incident happened after several Muslim youngsters from the madrasa were requested by the temple management to stop playing football on the field next to the temple.

On July 16, it was reported that a Muslim mob vandalized a temple, a grocery shop, and many Hindu homes in the Sahapara region of Lohagara, Narail, merely over a Facebook post.

The ISKCON Temple on Lalmohan Saha Street in Wari, Dhaka Division, Bangladesh, was targeted in March 2022. Haji Shafiullah, 62, was the mastermind behind the heinous attack. An Islamist mob of 150-200 individuals set siege to the ISKCON temple under his supervision. They desecrated the murtis (murtis), vandalised the temple facilities, and stole money and other valuables.

Attacks against minorities have been going unchecked in Bangladesh. Hindus remain susceptible to assaults by radical Islamic terrorists in a Muslim-majority country where they account for fewer than 10% of the overall population. OpIndia has documented 100s of such cases of persecution and ill-treatment meted out to the minority community. Given Bangladesh’s track record of human rights violations, attacks on Hindus remain a routine affair.

In 2021, Durga Puja pandals were attacked by Islamists in Bangladesh after a madrasa worker deliberately placed a Quran copy near one of the pandals to trigger ‘blasphemy’ allegations.