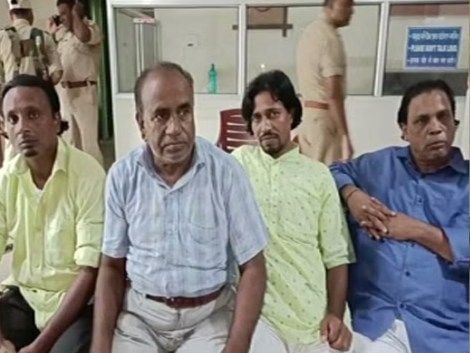 At a time when Assam police have busted several jihadi terror modules running from madarsas, the police arrested 17 Bangladeshis for illegally preaching Islam in the state. The Bangladeshi citizens had not entered by crossing the border illegally, but had come legally by obtaining visas. However, they were on tourist Visa, therefore were flouting visa norms by preaching religion.

The 17 Bangladeshi citizens were arrested from Baghmari in Biswanath district on Saturday. 11 of them have been sent to judicial custody by a court, while the rest 6 are being interrogated by police in their custody. According to reports, the group was preaching Islam in an extremely remote area of Baghmari along the Brahmaputra River in Biswanath district by setting up a camp there.

Among them, Syed Ashraful Alam, Anwar Hussain, Suhag Chowdhury, Azibur Sheikh and Masood Rana have been remanded to police custody for two days, while the rest eleven were sent to jail on judicial custody. Their hosts Jehirul Haque and Samsul Ali also have been sent to 2-day police custody. Those in police custody are being interrogated by officials of the special cell of Assam police at Biswanath police station.

The group had entered India on tourist visas and had visited various places like Delhi, Ajmer Sharif etc before entering Assam. The group had boarded a bus from Cooch Behar in Assam and arrived at Biswanath on 13th September. Ashraful Alam started preaching Islam at Baghmari after that and already had gathered around 500 people as his followers before his arrest.

Biswanath superintendent of police Navin Singh said that the group was arrested after getting a tip about their activities in the remote area. “We had a tip-off that these 17 people were engaging in activities like religious preaching, which is not allowed by foreigners entering on a tourist visa. We verified the information and arrested them,” Singh said.

It has been revealed that Syed Ashraful Alam was found preaching Islam in the South Salmara district along the Bangladesh border last month also, and on August 28 he was asked to leave Assam by the police. Accordingly, the group left Assam and visited other places in India, but returned again and reached Baghmari on September 13.

The location where the group was staying is a Muslim-majority area, and it has not been revealed whether the preacher group was trying to convert non-Muslims into Islam or were trying to induct Muslims into their specific sect.