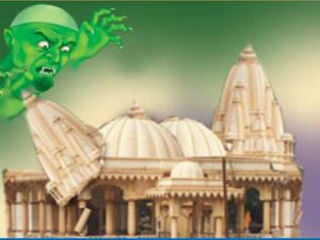 On Wednesday, the Uttar Pradesh Police booked two Islamists named Nimaj and Gulfam for damaging portions of a Hindu temple and issuing death threats to the temple priest in the Khandouli area of Agra. The accused also created a ruckus in the temple premises in an inebriated state and brutally assaulted the temple priest.

According to the Police report, the incident is said to have happened on September 11 at around 6 pm at Shri Balaji Mandir, Shah Nagar in the Khandouli area, Agra. The Police booked the duo based on the complaint that was filed by Ravi Kumar who is the president of the Balaji Mandir temple trust.

Ravi Kumar in the FIR mentioned that temple priest Umesh Kumar who is a resident of the Shah Nagar looks after the temple and performs ceremonial worship of the temple deity including rituals and offerings daily. On September 11, two Islamists named Nimaj and Gulfam from the same locality entered the temple in an inebriated state and began to create a ruckus inside the temple.

“They were drunk and continued to consume alcohol even after entering the temple. Further, they began using derogatory language toward priest Umesh after he asked them to stop drinking alcohol inside the temple premises. They also brutally thrashed him and issued death threats to him”, the complaint copy filed by temple trust president Ravi Kumar read.

The Islamist also have damaged a few portions of the temple, as per the FIR. The Uttar Pradesh Police have booked the duo under sections 302 (offense of murder), 504 (Intentional insult with intent to provoke breach of the peace), 295 (damaging any place of worship), and 506 (Punishment for criminal intimidation) of the Indian Penal Code. Further investigations in the case are underway.

Earlier on September 8, a similar incident was reported from Lucknow, Uttar Pradesh when a man named Taufeeq Ahmed vandalised Lord Hanuman’s idol at Lete Hanuman Mandir in the city. Ahmed allegedly had entered the temple premises donning a ’tilak’ on his forehead and began vandalizing the deity’s idol while screaming ‘Jai Shri Ram’. He also tore the temple’s flag, prompting the priests to notify authorities. Two idols at the temple have reportedly suffered damage and the accused has been arrested.