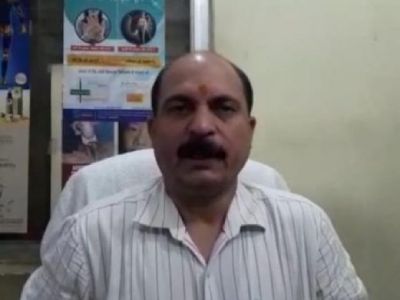 According to reports, a Hindu doctor in Ghaziabad received threats through WhatsApp warning him of beheading if he backed Hindu organisations. Dr Arvind Vats, who has run his clinic close to the Lohia Nagar police outpost under the jurisdiction of the Sihani Gate police station in Ghaziabad for 20 years, stated that he had received threatening phone calls from an American number.

The caller allegedly warned the doctor that neither UP Chief Minister Yogi Adityanath nor Prime Minister Narendra Modi would be able to save him. “I was threatened. I then lodged a complaint with the police. I have installed 12 CCTV cameras at home and clinic. I am also not taking the usual route to the clinic. The family is in fear. I have never said or done anything to provoke religious sentiments. I am a Hindu and I support Hindu organizations”, Dr Arvind Vats said.

UP | Yesterday a doctor came & complained that he had received a threatening call on WhatsApp. FIR has been registered. We've given the number to the cyber cell for tracking. He (the doctor) has not asked for security yet.We're probing the matter further: Muniraj G, SSP Ghaziabad pic.twitter.com/JV8mPLr5ij

“Yesterday a doctor came and complained that he had received a threatening call on WhatsApp. FIR has been registered. We’ve given the number to the cyber cell for tracking. He has not asked for security yet,” SSP Ghaziabad Muniraj G said. The investigation by the police is underway.

The incident should be seen in the context of recent beheadings in which several persons were slain for their support of Hindu organisations. Umesh Kolhe, a pharmacist from Maharashtra’s Amravati, was killed by four Muslim assailants on June 22 while returning from his pharmacy that night. Umesh Kolhe was assassinated because he stood with ex-BJP spokesperson Nupur Sharma when Islamists threatened her with death and rape for making innocuous remarks against Islam and Prophet Muhammad.

A spate of killings has followed the comments by ex-BJP spokesperson Nupur Sharma. Not only Umesh Kohle, but a Hindu tailor named Kanhaiya Lal was also brutally killed by Muslim assailants because of his sympathy for Sharma. Two Islamists, Mohammad Riyaz and Ghouse Mohammad murdered the Hindu tailor in Udaipur on June 28, 2022.

Mohammed Riyaz Akhtar and Mohammed Gaus fled the scene on a motorcycle with the number 2611 after killing Hindu tailor Kanhaiya Lal. It should be noted that 26/11 is the date of the Mumbai Terror Attack. The National Investigation Agency (NIA) is currently investigating this case.