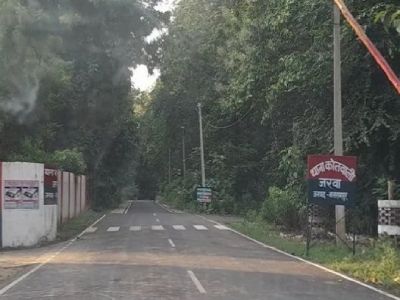 Several recent reports have shown that demography is changing rapidly along India’s border with Nepal. The number of mosques and madarasas is constantly increasing. From August 20 to 27, 2022, an OpIndia team visited several areas in Nepal bordering India to observe the ground situation. What follows here is the first episode of the series of reports documenting the facts noticed by the OpIndia team.

The Dang district in Nepal falls in the Lumbini state. We entered Dang from the Jarwa border in the Balrampur district of Uttar Pradesh. Vehicles were not allowed to cross the border. We walked about one and a half kilometres to reach the border of Dang. During this time, we had to go through security checks by the Sashastra Seema Bal (SSB) and the Nepal Police. This border is situated in dense forests. Our first stop was Koilabas village in the Dang district.

The very first village in Nepal had a Muslim Sarpanch

Abdul Khaliq is the village head (Sarpanch) of the Koilabas village. Villagers informed that no Hindu candidate even contested the election in this village housing approximately 1100 voters. Abdul Khaliq said, “Saddam won the election last time. He is from the Maoist party. The village has an equal population of Muslims and Hindus.”

Abdul Khaliq informed us that the Nepal government gives funds and grants to the madarasa in his village. He said, “In addition to the normal course, religious training is also necessary to maintain well-being. Teachers are appointed by locals in the village madrasa. Their expenses are borne by the government. There are 2 maulvis from India to teach children in the Islamia madarsa of the village.”

Village head Abdul Khaliq added, “Many clerics have gone to India after getting religious training from here. There are maulvis in Nepal too, but we get Indian clerics cheaply. They also get better salaries here than in India. There are many maulvis in the Garhwa and Lamhi areas of the Dang district. There are also madarasas and mosques in these places. Most of Nepal’s maulanas and maulvis are also involved in many types of trade.”

According to Abdul Khaliq, the Koilabas madarasa houses Indian students in addition to the Indian teachers. Most of them are from Bihar and West Bengal. Among these Indian students going to Nepal for religious studies, there are many girl students as well. They get free accommodation and food.

Abdul Khaliq informed us that he is not the only Muslim Sarpanch in that area. He told that Muslim village heads and Muslim lawmakers can be seen even in the interior parts of Nepal. To give an example, he named Nasaruddin Khan who is presently the Education Minister of the Lumbini state of Nepal. Besides, Mohammed Lalbabu Raut Gaddi, Fauziya Naseem, and Mohammed Yakub Ansari are important political figures in the Lumbini state.

Muslims draw the major chunk of benefits of the government schemes

About 1 kilometre after entering the Dang area, we saw a large mosque adjacent to the road. The mosque is right next to the Jhulangi bridge, Dang’s most popular tourist destination. Abdul Ahad, a local resident, told us that the mosque is more than 100 years old. Ahad also pointed out that some more mosques and madarasas in Koilabas have come up recently.

A few words were written in Arabic outside the mosque. Abdul Ahad described it as a prayer to be recited before entering the mosque. Abdul Ahad was accompanied by his relative Tauseef. After going a little away from this mosque, we saw another place of worship located a little away from the main road. There was also a Muslim-dominated colony around, in which stray goats and chickens were seen.

Most of the shops in Koilabas belong to Muslims. Right next to the Jhulangi bridge is Niyamat Ali’s shop where he sells tea and cold drinks. Abdul Ahad works as a cloth merchant. Abdul Vakil’s shop of chips and pan-masala was seen on the main highway. Abdul Vakil’s wife, who runs the shop, said that one of the two mosques in Koilabas belongs to the Muslims of the Ahal-e-hadith sect. The second mosque is for Sunni Muslims.

As we walked ahead, we met Mohammed Kamal and Mohammed Saddam. Both of them told that they have a business of mobile phones. They said that the SIM of Nepali telecom company ‘Namaste’ sells the most.

In the Dang district, we found many deserted and ruined houses. Babbu Kasaudhan, who once lived here, said, “Gone are the days when Koilabas was a Hindu-majority place. After 1995, our business suffered a lot due to Maoist violence. When trade and business were finished, we came to India. Hindus left the area with their entire family and settled in India. At the same time, only a few members of Muslim households left the family and went out to earn. For this reason, the area has now become Muslim-majority. All the empty houses in the area near the lane of the Ram Janaki Temple belong to Hindus.”

We also saw a house with a Swastika sign on it. ‘Shubh-Labh’ was also written on the walls of the house. But at the same house, some lines in Arabic were also written by scraping the wall. The Hindu name written on the door was also blackened. Talking about this, Babbu said, “For the last 3-4 times, a Muslim person is holding the post of the village head of Koilabas continuously. Now that Hindus are not there, who knows what someone is writing in their homes?”

According to Babbu Kasaudhan, many people of the Hindu community were misguided about the National Register of Citizens and they are afraid of the rule because they were told that they would not be allowed to stay in India as they own some land in Nepal. According to Babbu, this was also a major reason for Hindus selling out their lands in Nepal and going to India.

Scars of the Maoist violence

We saw a police station in a ruined state. A Passersby told us that Maoists had hurled a bomb at the police post in 2002. Six policemen were killed in that attack. Since then, the post remains deserted. However, the Nepal police’s identification mark is still visible on the walls of the ruined police station.

During our journey, we spotted 2 youths sitting by the roadside. As we tried to click their photos, they asked us to shut off the cameras. One of them was named Asif Siddiqui. He said, “We are from the Islamic State. Photos and videos are prohibited in our Islam. Till date, I have not taken a single photo or video. I have studied in madarasa till Class 8. There is no government job in Nepal, so I am preparing to go abroad.”

It was not just a few local Muslims who tried to stop us from coverage. Nepal’s police also refused to allow us shoot video and do photography. A police officer, called ‘Gautam Sir’, asked us not to do any kind of coverage.