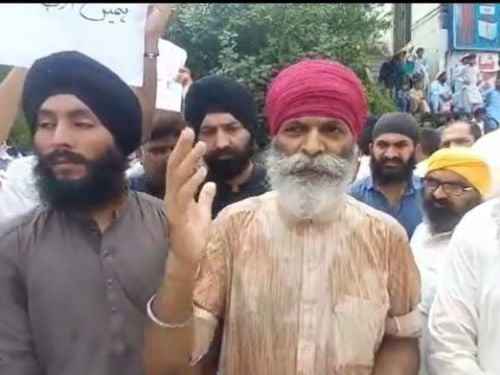 In another incident of flouting human rights in Pakistan, a female Sikh teacher was forcibly converted by Islamists in Peer Baba of the Khyber Pakhtunkhwa (KPK) province of Pakistan on Saturday 20th August 2022. The Sikhs in the KPK province are protesting against this forced conversion. A video of the protests appeared on Twitter on Sunday, 21st August 2022, in which Sikhs can be seen protesting and raising various slogans outside a police station in Pakistan.

A shocking incident has come to the fore when a female Sikh teacher was reportdely kidnapped in KPK in Pakistan, she was forcibly coverted & married to a Muslim.

Sikhs are protesting in front of a police station demanding justice.@CMShehbaz, Sir will they get Justice? pic.twitter.com/rHTjcv1qC3

According to a report by Aaj Tak, a young female teacher from the Sikh community was allegedly kidnapped on Saturday, and on the next day, her family was informed that the young girl is now married to a Muslim person. There is deep resentment in the Sikh community due to this incident.

Dina Kaur, a Sikh teacher was kidnapped on Saturday. On Sunday, her family members knew about the forced marriage and subsequent conversion. The family reached the police station where nobody cared to register their complaint. According to the family members, the local police have not registered any FIR and have asked the Sikhs to be silent on this issue.

BJP leader Manjinder Singh Sirsa has expressed concern over this incident. Tagging the government of Pakistan in his tweet, Sirsa said, “How can a family silently watch its daughters being forcibly converted and emotionally exploited? This is against basic human rights and we stand in support of the Sikh brothers of Pakistan. I urge India’s External Affairs Minister S Jaishankar Ji to intervene in this matter.”

But how can a family silently watch their daughters being converted forcibly? This is agnst basic human rights.
We stand in support of Sikh brethren of Pak. I urge @DrSJaishankar Ji to address issue of minority Sikhs in Pak; @PakPMO turned deaf ear to our tweets on this issue https://t.co/X3OuzUpE5U pic.twitter.com/KziPfIqwOs

He added, “I urge the External Affairs Minister to hold talks on the issue of minority Sikhs in Pakistan. Pakistan’s Prime Minister’s Office is also not paying attention to this. Our earlier tweets on the safety of Sikhs in Pakistan have been ignored.”