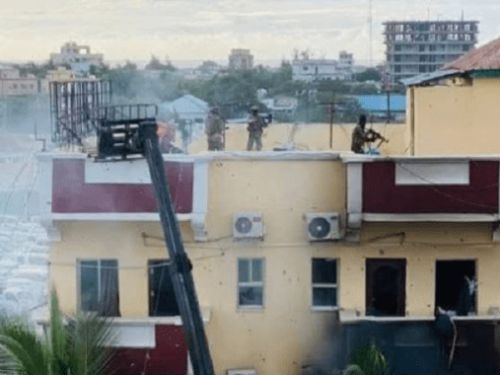 On Friday, Islamist terrorists of Al-Shabab attacked Mogadishu’s Hayat Hotel in Somalia killing at least 10 people and injuring several others. The terrorists executed an explosion outside the hotel first and then entered the building with guns, explosives, and other weapons.

According to the reports, the Islamic extremist group Al-Shabab has claimed responsibility for the attack. The terrorist group executed the attack on August 19 at a hotel in Somalia’s capital which is often visited by government officials. Al-Shabab which is the affiliate of a terrorist organization named Al-Qaeda is in a long-running conflict with the federal government.

BREAKING: Al Shabab group claims the responsibility for a bomb-and-gun attack on Hayat hotel in Mogadishu. Many people are trapped. A sporadic gunfire could be heard as the security forces have started an operation to end the hotel siege. pic.twitter.com/OybX8wKItd

The Police and the eyewitnesses claimed that gunfire could be heard on Saturday early morning too. “Two car bombs targeted Hotel Hayat. One hit a barrier near the hotel, and then the other hit the gate of the hotel. We believe the fighters are inside the hotel”, a police officer informed Reuters. The eyewitnesses also claimed that the number of gunmen who entered the hotel last night is unclear. More than 10 people have lost their lives in the incident and several others are reported injured.

“The security forces continued to neutralize terrorists who have been cordoned inside a room in the hotel building. Most of the people were rescued, but at least eight civilians were confirmed dead so far,” an official named Mohamed Abdikadir was quoted.

Reports mention that many of the guests and staff members were rescued by the security agencies who continued to neutralise the terrorists holed up on the top floor of the hotel. However, unverified social media photographs appeared to show smoke rising from the hotel as shouts and loud noises could also be heard.

To note, the Islamist terrorist organization Al-Shabab controls the majority of southern and central Somalia but has expanded its influence into areas controlled by the Mogadishu-based government. In recent weeks, Al-Shabab forces have also assaulted locations near the Somalia-Ethiopia border, raising fears about the group’s likely new strategy. The strike on Friday was the group’s first in the capital since Hassan Sheikh Mohamud, Somalia’s new president, was elected in May.

In the year 2008, a similar incident was reported in Mumbai, India when 10 terrorists of the terrorist organization Lashkar-e-Taiba entered the city and executed a series of terrorist attacks lasting for four days. The attack that happened at Chhatrapati Shivaji Terminus, the Oberoi Trident, the Taj Palace and Tower, the Leopold Cafe, the Cama Hospital, the Nariman House, the Metro Cinema and in the lane behind the Times of India office resulted in the death of more than 175 civilians and around 300 injuries.