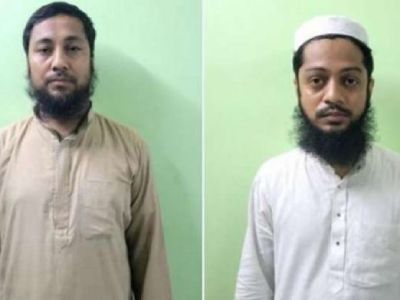 On Wednesday, the special task force (STF) unit of the West Bengal Police foiled a massive terror bid as it arrested two suspected terrorists having links with Al-Qaeda from the Shashan village of Barasat block in North 24 Parganas district of West Bengal.

The police have also seized several pieces of radical literature indicative of waging war against the Union of India from their possession.

The STF source confirmed that the detained persons have been identified as Abdur Rakib Sarkar, a resident of Gangarampur, District Dakshin Dinajpur, and Kazi Ahasan Ullah, a resident of Arambagh, District Hooghly. The duo might be active members of the banned terrorist outfit in the Indian Sub-Continent (AQIS), an affiliate group of Al-Qaida, said the police.

According to reports, the STF received a tip on Wednesday night about alleged Al Qaeda terrorists hiding in North Parganas, along with incriminating materials including anti-national documents. Following the tip, the STF raided the Kharibari area of Shashan, North Parganas, and apprehended the alleged terrorists.

Sources in the STF said that their team learned that Sarkar would arrive late Wednesday evening to meet Kazi Ahshanullah at the latter’s residence in Shashan in North 24 Parganas. Accordingly, STF sleuths laid traps and nabbed Sarkar along with Ahshanullah as soon as they reached Shashan.

It has been learned that several cases have been registered against Sarkar and Kazi Ahshanullah at various police stations in West Bengal. STF was looking for both of them for a long time for active involvement in insurgency activities.

According to reports, during interrogation, the duo admitted to being active members of AQIS. The STF investigators are currently questioning them about their other associates in the West Bengal terrorist chain or sleeper cells. STF sources said that the accused named 17 others who have been active in the region during their interrogation. The police, accordingly, is now initiating a specific case under the various provisions of the UAPA and IPC against the two detained accused and the other 17 names revealed during their interrogation thus far.

Meanwhile, the duo will be presented in a lower court in Barasat on Thursday, where the STF will seek their custody for further questioning.