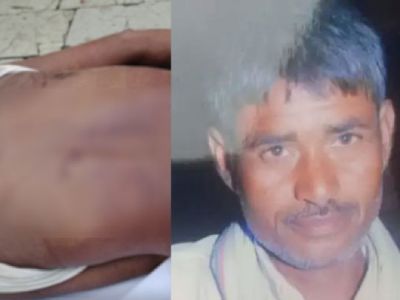 On August 16, Rajasthan Police arrested Vikram Khan, Asad Khan, Syabu, Sahun, Taleem, Kaasam, and Pola for lynching 43-year-old labourer-cum-vegetable vendor Chiranji Lal on suspicion of theft in fields near Rambaas Village under Govindgarh Police Station area. They have been booked under relevant sections of the Indian Penal Code. Police have also seized an SUV used by the accused.

As per reports, at around 4:30 AM on August 15 morning, Chiranji Lal was relieving himself in the fields. A tractor came rushing into the fields, and a pickup truck and SUV were following it. Soon, the tractor driver, who had stolen it, allegedly left it in the fields and ran away. There were 15-20 people in the two vehicles following the tractor.

As the tractor was parked close to Chiranji Lal and the thief who had actually stolen the tractor had escaped, the owners of the tractor assumed Lal was the thief and attacked him with sticks. A complaint in the matter was lodged in Govindgarh Police station by Chiranji Lal’s 25-year-old son Yogesh. In his complaint, Yogesh said, “When I and my uncles Harish and Shivlal ran out upon hearing the noise, we saw one Vikram Khan and others, who left upon seeing us.”

Lal was rushed to Govindgarh hospital. Owing to serious injuries, he was referred to Alwar, from where the doctors asked his family members to take him to Jaipur. Lal succumbed to death at SMS Hospital while receiving treatment at around 3 PM on Monday.

Alwar SP Tejaswani Gautam said that a tractor belonging to the accused was stolen. They were searching for the tractor when they saw Chiranji Lal near it in the field and assumed he was the thief. He said, “Vikram Khan got to know that his tractor is in a particular village. So, when he reached there with his relatives, he did find the tractor, but the thief had managed to run away. Spotting Chiranji Lal, the men assumed him to be the thief and assaulted him.”

Dainik Bhaskar, in a report, suggested that the accused had called the Police themselves. The Police reached the spot at around 6:30 AM, and till then, the locals and the accused were arguing. The Police pacified the situation for the time being and rushed Chiranji Lal to a local hospital, from where he was referred to Alwar and then Jaipur.

Chiranji Lal died at around 3 PM on Monday, and his dead body reached the village at around 11 PM. On Tuesday morning, villagers and local leaders blocked the Ramgarh-Govindgarh road demanding compensation and the arrest of the accused. At around 2:20 PM on Tuesday, there was an agreement between Chiranji Lal’s family and administration over compensation. The family got five lakhs immediately and the local administration has promised to appeal to the government for compensation of Rs 50 lakhs and a job for a family member of the victim. The administration has promised a job to a family member too.