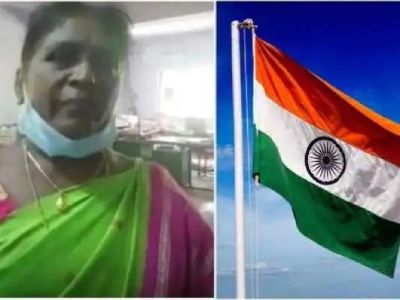 During celebrations for Independence Day, the principal of a government school in the Dharmapuri district of Tamil Nadu refused to hoist and salute the national flag. The headmistress allegedly declined to salute the flag, stating that she is a Christian and that it is against her religion for her to do so. The Chief Education Officer has launched a probe as the issue has picked up steam.

Tamilselvi – the principal of a public school in the Dharmapuri district – is retiring this year. According to reports, a special program was planned to honour her on August 15th. However, the assistant headmaster hoisted the national flag because the principal refused to do so. The headmistress contended that her religious convictions forbade her from doing so.

Even in the past, Tamilselvi had objected to hoisting and saluting the tricolor. Tamilselvi claimed that she is a Christian and that not saluting or hoisting one’s national flag is not disrespectful. She said, “We only salute God and no one else. We respect the flag but we will only salute God.”

As the controversy spread, a complaint was submitted to the Chief Education Officer (CEO) of Dharmapuri. In this complaint, it is mentioned that headmistress Tamilselvi was on leave during the Independence Day celebrations this year. Not only this but even for the past so many years, she did not attend the Independence Day program in the school citing various health issues.

It is notable that, this year, the central government appealed to people to hoist the national flag on their houses from 13th to 15th August 2022. Changes were made in the flag code accordingly. This campaign was called ‘Har Ghar Tiranga‘. This campaign received an overwhelming response from the people. On this backdrop, this incident from Tamilnadu appeared in which the principal of a government school refused to hoist and salute the national flag on the occasion of Independence Day citing her religious faith.