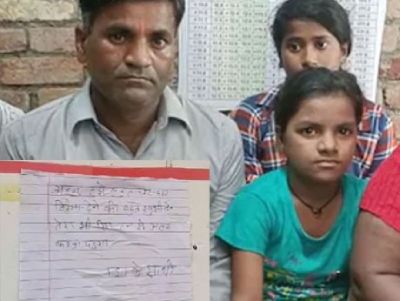 On August 15, a handwritten death threat note was found pasted outside an Anganwadi worker’s house in Buddhu Pad, Bijnor, Uttar Pradesh. The note read, “Annu, you seem happy over distributing Tiranga to every house. Now you must be beheaded.” It was signed as ‘Friends of ISI.’ The note was found pasted outside Arun Kashyap alias Annu Kashyup’s house by his son on Sunday morning. He informed Arun about the note, who immediately called the Police.

Arun works as a Confectioner, and his wife Shashi is an Anganwadi worker. He has three children, two sons and a daughter. They had distributed Tiranga under ‘Ghar Ghar Tiranga’ scheme on Saturday. In a statement, Arun said, “My son found the note. I immediately called the Police. I am scared of going out of the house. My son works in a school in Bijnor. He was also asking if he should go to work or not. My wife works at Anganwadi, so we distributed 1-2 flags in our colony as well. The threat came after that.”

After seeing the note, Arun informed Kiratpur Police Station. The Police have initiated a probe into the matter and investigated the note based on the handwriting to find out who wrote it. A case against an unknown accused has been registered by the Police.

Zee News report noted similar notes were pasted on several shops near Arun’s house. There was a handcart and a tea stall outside Arun’s house that had the notes pasted. These notes also had Arun’s name.

Following the threat letter issued allegedly by Pakistan’s ISI, Arun has been provided security. Two Police Personnel have been recruited outside his house. Superintendent of Police (SP) City, Dr Praveen Ranjan, said a case had been filed, and security had been provided to the victim. The Police are also checking CCTV footage from the area. Further probe is underway.