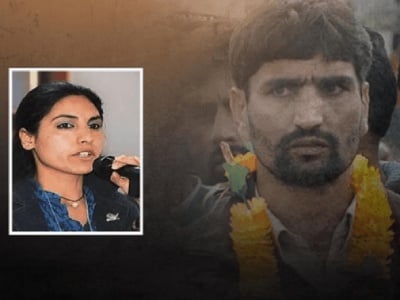 The Jammu and Kashmir administration sacked four government employees, including terror accused Bitta Karate’s wife and Hizbul Mujahideen chief’s son and a former LeT terrorist, without an enquiry under Article 311 of the Constitution of India, for having terror links.

The activities of these employees had come to the adverse notice of law enforcement and intelligence agencies, as they have been found involved in activities prejudicial to the interests of the security of the state.

Here are the details of all four sacked govt employees:

Mueed was suspiciously appointed in 2012 as an IT consultant on a contractual basis. Sources said rules were circumvented to appoint Mueed. At least three members of the selection panel were also comprised of officers known to be terror sympathizers. His contractual position was subsequently converted into a permanent one. No mandatory CID verification was done in Mueed’s case.

From the time of his appointment in 2013 to 2019, at least three terror attacks were executed in and around the JKEDI complex in Pampore. Several security forces have lost their lives. Mueed played a crucial role in these attacks by giving targets and logistics, sources alleged. He has also been indoctrinating young boys and girls coming to JKEDI to start their own enterprise.

It is interesting to note that Salahudin’s other two sons, Ahmad Shakeel and Shahid Yousuf, were also inducted into the government system in 2000s in brazen violation of norms while circumventing the screening process. Both were sacked and are now in jail and facing trial.

Assabah is a 2011 batch JKAS officer and a diehard secessionist having deep ties with terrorist outfits and the ISI. She came in the spotlight during Karate’s trial. Assabah first got a job at Sher-e-Kashmir University of Agricultural Science and Technology in 2003.

She allegedly got an appointment through the backdoor and appeared to have been managed by someone in the administration. It has come to light that between 2003 and 2007 she was absent from work for months and was sacked in August 2007.

Sources also claimed that during her absence from work, Assabah travelled to Germany, UK, Helsinki, Sri Lanka and Thailand. The investigation has revealed that she was working as a cash mule for JKLF and while departure was through airports, her arrival in India was mostly via the road route of Nepal and Bangladesh. In 2011, she cleared the JKAS exam and married Bitta Karate within a few months.

Majid Husaain Qadri was a hardcore terrorist of LeT. But before that, he was a student of MBA at Kashmir University in 2001. Sources said Majid came in contact with two Pakistani LeT terrorists in August 2001 and became LeT point-person for Kashmir University for radicalization and recruitment. Subsequently, in 2002, he was tasked to act as an arms courier for terrorists.

In 2003, he was assigned the position of spokesperson of LeT and continued till his arrest in June 2004. A sniper rifle was also recovered from him. He was detained under PSA for two years and subsequently acquitted by the court. Sources said between 2002 to 2004, Majid also executed four terror attacks by providing logistical support to the terrorists.

Sources said Majid was acquitted because of the failure of the investigation and prosecution. In March 2007, he was appointed as a contractual lecturer at Kashmir University. His recruitment case was never sent to the CID for character verification. He was appointed as Assistant Professor in Kashmir University in 2010. He is presently working as an assistant professor in the department of management of studies.

Muheet Ahmad Bhat is a scientist D in the department of computer sciences of the Kashmir University. Muheet was an executive member of the Kashmir University Teachers’ Association (KUTA) from 2017 to 2019 and its President from 2017 to 2019. He played a key role in organising student protests and street protests in 2016 in which around100 people died and thousands were injured.

KUTA had carefully avoided its registration as a society to avoid audit scanner yet continued to use banking channels. He is considered as a key man who radicalized students and carried out Pakistani propaganda in Kashmir.