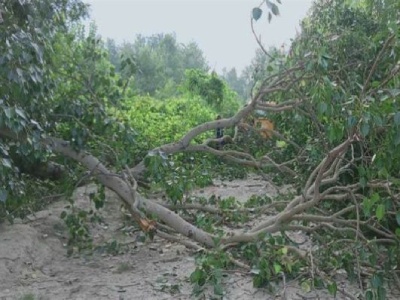 Uttar Pradesh police have arrested 7 miscreants for vandalizing a Hindu temple in the Kanchanpur village of the Shergadh area in the Bareilly district on 11th August 2022. The arrested Muslims are accused of chopping larger branches of the holy Pipal tree near a temple located at the Brahmadev Sthal, allegedly to widen the path for Taziya procession during Muharram. During the process of cutting the branches, they allegedly vandalised the idol in the temple, threw away the donation box and damaged the temple by using a bulldozer.

On Tuesday, late in the night, the local Muslims of Shergadh deployed a JCB machine to cut the larger branches of the holy Pipal tree at the Brahmadev Sthal of the temple. After that, they also damaged the temple, vandalized the idol, and threw away the donation box. According to a report by Jagran, the Muslim miscreants were chopping the trees which could have allegedly caused an obstruction to the processions of Muharram. The Bareilly police have arrested 7 key accused in this case now. The names of the accused are Bundan, Shakkhan Khan, Moin Khan, Sakir Ali, Iqrar Ahmed, Chhote, and Raees Khan.

As the news spread, local Hindus started gathering on the spot in large numbers. The situation worsened and the police could not control the mob pressure. A case was then registered against the unknown accused. The forest laws and other relevant sections were imposed. The police also detained 29 suspected accused on the same day.

According to the villagers of Kanchanpur, the Muharram processions from several adjacent villages had already passed by peacefully. But at around 12, at midnight, some miscreants deployed a JCB machine to cut some larger branches of the Holy Pipal tree. The villagers have accused this is nothing but the execution of a preplanned conspiracy, because some of the people participating in the Muharram procession had said that they will make a way for themselves so that next time the processions will pass without any hurdles.

The aggrieved villagers informed the local police station. In order to control the situation, the local administration and police immediately ordered to repair the damages done to the temple structure, and thus, the temple was repaired. The arrested accused are being interrogated and the police will take necessary action in this case after the investigations.

It is notable that violent clashes erupted in the Bhojipura area of Bareilly on the occasion of Muharram. Amid the Muharram procession, the Islamists pelted stones at shops in the Majhoua Gangapur area of Bhojipura. The video of the incident went viral over social media. About half an hour after which the Police reached the spot and tried to pacify the matter.