Protests with participation in thousands were held at several places in Bhind district of Madhya Pradesh yesterday (3 August) in a case of “love jihad”.

The protests were called by Rajput Karni Sena, a Rajput caste group with members from several states, and were supported by Vishwa Hindu Parishad’s youth wing Bajrang Dal. 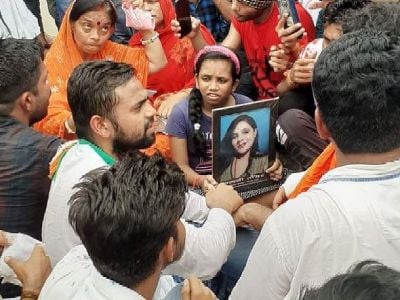 A woman named Nandini Tomar was found dead at her house two months ago. The police termed it suicide due to depression related to money, and booked a man named Toufiq Khan for abetment of suicide. However, he was not arrested until the Sena highlighted the matter two days earlier.

A day before the protest, the Sena called a press conference, in which Nandini’s elder sister Madhulika and minor daughter from her previous marriage participated.

Swarajya could not find the copy of the police case on the Madhya Pradesh police’s citizen portal. However, a protester shared a picture of the police officer’s statement recorded in the case with this correspondent.

The statement says that the officer, who is posted at Bhind Kotwali police station, carried out a preliminary investigation on 7 June after receiving the post-mortem report of Nandini’s body. The report shows the reason of her death as Asphyxia, pointing to suicide by hanging.

Interrogation with her immediate family members and acquaintances revealed that Nandini was in a relationship with Toufiq. The family alleged that she had given him some money to open a gym, but he was not returning it. Nandini was tired of the harassment by him, they said.

The officer’s statement further says that Nandini’s paternal uncle Dharmendra learnt about her death from her neighbours, and immediately rushed to the police station on the afternoon of 5 June, after which the police arranged for her body to sent for most-mortem.

The preliminary investigation suggested the role of Toufiq under IPC section 306 (abetment of suicide), the statement concludes.

In the press conference on 2 August, Nandini’s sister Madhulika said that a few days ago, she discovered what looked like a government-issued voter identity card of Nandini. The card showed Nandini’s name to be Zoya Khan and her husband’s name as Toufiq Khan.

“I have found this ID card. Court must investigate the authenticity of this. There was also the issue of money. She was in a lot of debt and was highly depressed about it. She had given her money to Toufiq, who had promised her that the gym would fetch them a good income. Basically, he showed her a very rosy picture. When she later confronted him, he asked her what proof she had that she had lent him money,” Madhulika said.

Madhulika further said that Nandini’s daughter only recently revealed to her that Toufiq used to beat up Nandini. “My niece did not tell me these things earlier as Nandini had asked her not to. But now, she tells me that Toufiq would often raise his hand at Nandini and would torture her.”

On the day of the press conference, Kamlesh Kumar, Additional Superintendent of Police of Bhind, told the media that Toufiq had been arrested for abetment of suicide and the voter ID card is under investigation by forensic experts for authenticity.

The Bhind police also shared a press note the same day saying the arrest was made on 1 August, that is a day before the arrest. Read the note below: The Rajput Karni Sena led the agitation on 3 August at several spots in Bhind. The protest sites included the gym opened by Toufiq, allegedly with Nandini’s money.

A media statement released by the Sena after the protests said that Nandini had died of “love jihad” but the police were calling it suicide. “Toufiq Khan befriended Nandini, trapped her in love, converted her religion, and fleeced money from her. He harassed her so much that she killed herself. We demand strict punishment for Toufiq,” the statement says.

A protester told Swarajya that Toufiq lived in a rented house opposite Nandini’s house. Nandini’s father had died some years ago. After his death, Nandini had got his government job of a peon.

Police have called the voter ID card as seemingly fake

After the protests, the Bhind police shared a press note saying the voter ID card appears to be fabricated as per preliminary investigation.

The note says that a first information report numbered 310/22 was filed at the Bhind Kotwali police station under IPC section 306, and the accused was arrested on 1 August 2022. On 2 August, the gym run by the accused was sealed as well.

The note further says that a voter ID card shared by Madhulika in the press conference was found to be fabricated in the police investigation. The police would identify the person who fabricated the document and take action against him, the note says.

You can see the ID card shared by Madhulika here.

Read the police press note below: 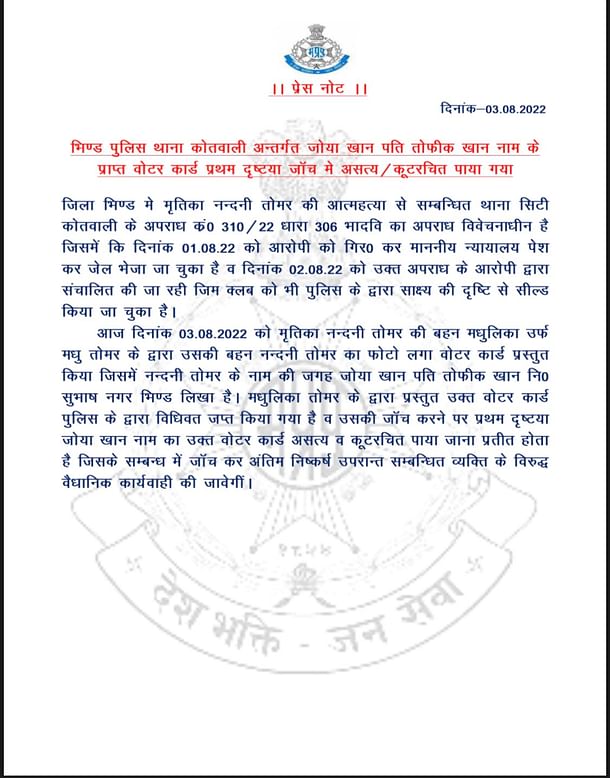 A fake video of Nandini that surfaced on social media

A few days ago, an undated Instagram Live video of a woman talking to a social media influencer named Bobby Kataria went viral on social media. In the video, the woman is seen making allegations against a man, saying he is in the habit of making relationships with a series of women and uses women for money and sex, and records their sexual acts on camera.

The video was shared with the claim that the woman is Nandini and she is making allegations against Tousif. However, the police say that investigation revealed that the claim is false and the woman in the video is not Nandini.

The police released a press note yesterday (3 August) saying that someone shared the video with the false claim, tagging 97 people and making it go viral. The police have booked seven people for sharing the video under IPC 500, 504, 34 and sections of the IT Act.

Read the note below: 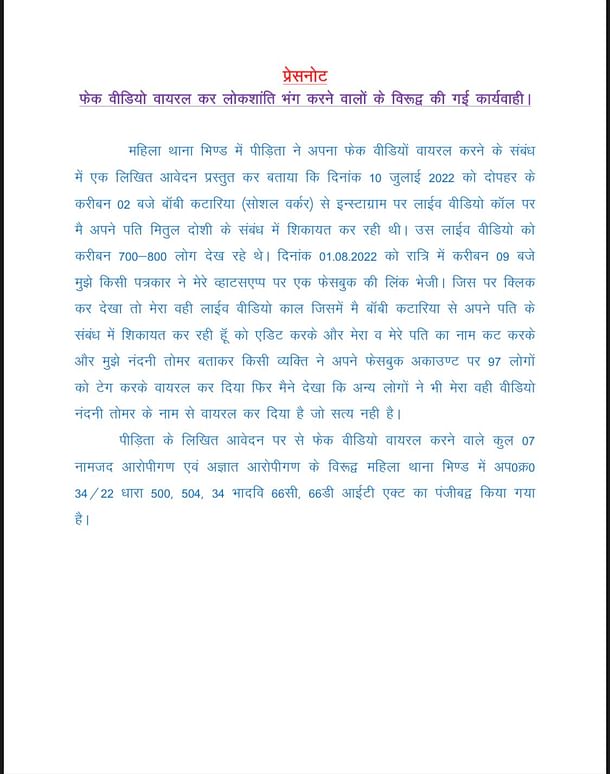 Santosh Bhadauria, who holds a post in the Rajput Karni Sena, told Swarajya over the phone that he came to know about the case last week when Nandini’s sister Madhulika met him, requesting support for arrest of Toufiq.

“Until we took up the matter, the police did not arrest Toufiq. It was only after our agitations that police sealed his gym that was set up from Nandini’s money,” he said.

Bhadauria said that protesters were highly disappointed with the conduct of the police in the matter.

“They delayed arresting the accused for two months, but have promptly booked seven of our men for sharing a video on social media. Is this justice?” he said.

About the voter ID card, Bhadauria said that Madhulika or the Karni Sena never claimed it to be authentic. “We in fact asked the police to verify its authenticity. The fact is that it was found among Nandini’s documents two months after her death. If it is fabricated, who fabricated it? Maybe it was Toufiq. Why is the police targetting us,” he said.