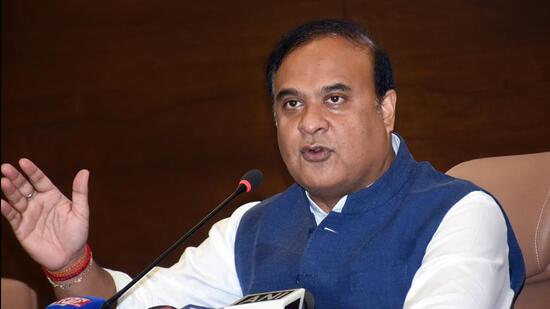 Assam has become a hotbed for Islamic fundamentalism and five ‘jihadi’ modules with links to Al-Qaeda affiliated terror outfits in Bangladesh have been busted in the past four months, chief minister Himanta Biswa Sarma informed on Thursday.

“We have busted five modules of Ansarullah Bangla Team (ABT), a banned terror outfit of Bangladesh with links to Al-Qaeda in Indian Subcontinent (AQIS), in the past four months,” Sarma said while addressing a press conference.

“Inputs provided by those arrested helped bust terror modules in West Bengal, Tripura, Madhya Pradesh and Karnataka. All this was done with the active cooperation and coordination of national security agencies,” he added.

Sarma said that as per available intelligence at least six ABT members from Bangladesh had entered India illegally around 2016-2017 and have been creating terror modules and sleeper cells by indoctrinating local youths in Assam about ‘jihadi’ ideology.

“It has now been proved beyond doubt that Assam has become a hot bed for Islamic fundamentalism. Of the six ABT members, we have nabbed just one and five are absconding. So, you can imagine the gravity of the situation. There may be 100 such others, which we are not aware,” said the CM.

“Al-Qaeda chief Ayman al Zawahiri was killed a few days back in Kabul. This was the same guy who had appealed for jihad in Assam. This shows that Assam is already in the radar of the top Al-Qaeda leadership,” he added.

On July 27, police in Barpeta district busted an ABT module and arrested 9 people—8 in Barpeta and one in Guwahati. The same day, another module was busted in Karnataka with the arrest of a resident of Kathigora in Cachar district of Assam in Bengaluru.

A day later on July 28, police in Morigaon district busted another module and nabbed Mufti Mustafa at Moirabari. The accused used to run a ‘madrasa’ where children were indoctrinated in ‘jihadi’ ideology. Mustafa allegedly used to shelter ABT members from Bangladesh and also acted as a conduit for financial transactions from the neighbouring nation.

Mustafa obtained a doctorate in Islamic law from Bhopal in 2017 and had earlier studied in Islamic institutes in Maharasthra and Uttar Pradesh. After coming back to Assam, he opened a madrasa at Saharigaon in Moribari, Morigaon where 43 students were studying.

“The madrasa, which was sealed on July 28, was demolished on Thursday under the provisions of the Disaster Management Act as well as Unlawful Activities Prevention Act (UAPA) as it was constructed without permission from local authorities, had illegal electricity connection and it was unsafe,” said Himanta.

“The students studying there have been admitted in government schools with active assistance of their guardians and parents. Mustafa had met top leaders of ABT in Bangladesh and ‘jihadi’ literature, electronic evidence including jihadi videos were found in his phone,’ he added.

On March 4, a sleeper cell of ABT was busted by Barpeta district police and 6 people including a Bangladeshi national called Mohammed Suman arrested. A resident of Narayanganj district in Bangladesh, Suman had entered India illegally through West Bengal, later married a girl in Assam and settled in Barpeta in 2018.

“He was working as an Arabic teacher in a local ‘madrasa’ as well as a preacher in a mosque at Dhakalipara in Barpeta. Suman was indoctrinating terror ideology among Muslim youths with a view to recruit them in jihadi outfits and create a base for Al-Qaeda,” said Sarma.

On April 14, Barpeta police busted another ABT sleeper cell and arrested six people in connection with another case. The same month another module was busted in Bongaigaon district and five people including three residents of Tripura were arrested.

According police investigation, members of ABT were found using highly-sophisticated technology to communicate, rarely using their phones for calls and there was complete compartmentalisation of different modules with members using several aliases.

“We noticed extreme levels of radicalisation and total allegiance to ‘shariat’ law among those arrested. Interestingly, the hub of all these activities, as of now, appears to be ‘madrasas’. I am not generalising, but whoever has been arrested till date have had some connection with ‘madrasas’ or were acting as preachers in some mosque,” said Sarma.

“These people were working as preachers in mosques—as a cover job—their aim was to wage jihad against India and establish ‘shariat’ law. Several training camps were organised by these people especially during Covid-19 times. They were trained in tradecraft (techniques/technology used in modern espionage), radicalisation, indoctrination, gun training and bomb making,” he added.

Himanta stated that the ABT members from Bangaldesh start with finding a base, followed by indoctrination of youths, then active participation in ‘jihadi’ works and finally leading to subversive activities.

He informed that the state government is taking the issue very seriously and is creating a special cell in Assam Police to specifically look at this issue. This will be a continuous activity and police will continue nabbing them and busting their modules.

Terming the situation as worrisome, Himanta urged everyone should become and inform police if they notice anything suspicious. He asked Muslims in the state to be careful about preachers in local mosques who come from outside the state.

“It is untrue to suggest that all Muslims in Assam have ‘jihadi’ tendencies. Most information and tip-offs about modules we have busted came from local Muslims who are peace loving. We should not generalize that all ‘madrasas’ are teaching ‘jihadi’ literature or indulging in indoctrination,” said Himanta.

“We are not targeting anyone without basis. Actions have been taken based on specific information with the aim of protecting India and Indians. There’s no other malice or motivation. There should be a more vigorous watch by local citizens on what is being taught in ‘madrasas’,” he added.

The Assam government has already closed nearly 800 government-run ‘madrasas’ in the state and converted those to regular schools. According to government data, at present there are around 1,500 private madrasas–800 ‘qawmi madrasas’, 500 ‘hafizi madrasas’ and 200 ‘banat madrasas’.

“I have firm belief that Muslims of Assam will cooperate with us. This is not to defame any community, but to alert them and seek their cooperation. We have never investigated who are working as preachers in mosques or in other religious places. But now we will have to be aware about preachers in mosques who are not from Assam,” said Himanta.

The CM suggested that along with religious education ‘madrasas’ should teach students Maths and other subjects so that they are able to decide later whether they want to continue with religious studies or join other fields. He added that there should be regular inspection of ‘madrasas’ and they should be registered.

Himanta informed that the state government would take affirmative action by starting model government schools in Muslim areas so that poor people have other options than ‘madrasas’ where they can send their children to study.

“While Popular Front of India (PFI) has no direct links with the ABT modules we busted, that organisation is creating an eco-system. They are spreading lies that Muslims are victims of the state. They don’t talk about benefits given to Muslims in the past eight years,” said the CM.

Giving a background to ‘jihadi’ activities in the state, Himanta informed that they were first noticed in 1999 with bursting of a module of Bangladesh-based Harkat-ul-Mujahedin (HUM). In 2003-04, a module of Harkat-ul-Jihad-al-Islami (HUJI) was busted.