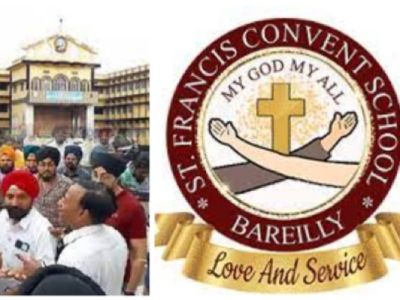 On July 21, Thursday, parents and various members of the Sikh community reached St. Francis Convent School in Bareilly, Uttar Pradesh, to protest against a directive issued by the school authorities, asking Sikh students not to wear a turban (Dastar) and Kirpan (a ceremonial dagger) to school. Notably, both these things are religious symbols of Sikhism with the Kirpan being one among the 5 distinguishing signs of the Sikh Khalsa.

According to reports, the former president of Model Town Gurdwara Committee Malik Singh Kalra informed that a school teacher on Wednesday told students during a prayer meeting that all the children should be seen in the same uniform and those who come wearing a turban, carry “kirpan” or “kada” (steel bracelet) should stop doing so from Thursday.

Alleging that the teacher had asked the children to quit the school for failing to follow the order, several members of the Sikh community, reached the school premises on Thursday. Opposing the decree issued by the authorities, they sought the removal of the school’s principal.

After the news gained traction, the Shiromani Gurdwara Parbandhak Committee (SGPC) also jumped into the fray. The apex religious body of the Sikhs took strong objection to the directive issued by the missionary school. Also, condemning yesterday’s incident where a former Granthi named Gurbaksh Singh was assaulted by some unidentified Muslim youths in Alwar, Rajashthan, the SGPC president Harjinder Singh Dhami said in a statement, “I appeal to Sikhs living across the country to come together and organise to firmly raise voice against people who are doing discrimination against Sikhs and urge the administration at the local level to take action.”

Meanwhile, as soon as the Bareilly District Magistrate Shivakant Dwivedi learned about the protest happening on the school premises, he rushed to the spot and pacified the protesters. He summoned the principal Anne Rose and the parents to his office.

Dwivedi confirmed that the school management acknowledged that there was some misunderstanding and apologised for it. He added that the issue has been resolved.