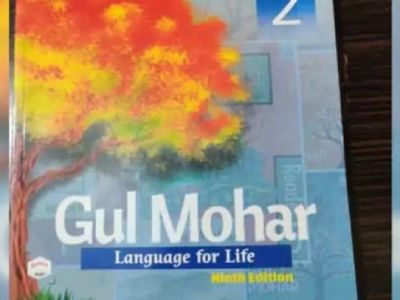 A private school in Rajasthan’s Kota is embroiled in a row over a textbook used to tutor Class 2 students. The book contains Urdu terms and names.

According to reports, the book is being read by the majority of non-Muslim pupils. The students in the second standard are taught, through this book called Gulmohar, to call their parents Ammi and Abbu. The 113-page book costs Rs 352.

The ‘Gulmohar Book’ given to second-class children at Shiv Jyoti Convent School in Kota city has many words that have angered parents. The family members alleged that the children have started asking for Biryani after reading this book and non-Muslim children have also started calling their parents Ammi and Abbu.

Parents have reported that their children, who attend a private English medium school, have begun to use phrases like Abbu and Ammi to refer to them at home, and have also begun to want Biryani to eat. Gulmohar is a book published by a Hyderabad-based publisher. Parents raised concerns about the book to local Bajrang Dal activists, who filed a formal complaint to the education department. The book is viewed as an attempt to Islamize the classroom curriculum.

Parents of the pupils attending this school said, “How can these things be taught to our children in the schools? We don’t know how Biryani is made and the school asks kids to have Biryani once a week and bring it to schools in their tiffins. What kind of school is this? What are they teaching to our kids? And what good they are doing for our kids by giving such education?”

“We are poor people, earning our livelihood by working hard. We enrolled our kids in the school with the hope that they will learn something better. But what these schools are teaching them? If we wish, we can shut your schools forever. But right now we don’t intend to do anything like that. Our kids tell us that they are told in school to call their mother Ammi and father Abbu. And kids continue to like what they are taught. Then why not teach them in our language? Teach them in our language. Tell them that mother means Maa and father means Baba. Why are you teaching them that mother means Ammi and father means Abbu?” they further said.

Another woman said about the curriculum, “See they are teaching the kids to call their parents Ammi and Abbu. Is this our culture? Should the kids be taught like this? What will be the fate of our culture if the kids are taught like this? Schools are meant to inculcate good values and culture into the kids. And this school is teaching the kids to call their parents Ammi-Abbu. Are we paying our hard-earned money for this? Now, see this book. They are asking kids to make Biryani at home once a week and bring it to school. Can we make Biryani? Should this be taught to the kids?”

Another male parent said, “This Gulmohar book is being taught in a reputed convent school. The language is being changed in the name of educating the kids. Had it been some community school of particular religion or faith, or some school that gives religious education, then there would not be any objection. But the kind of language being taught here in the name of a convent school, it is clear that they are trying to take the children away from their Hindu culture.”

Many characters in the book are non-Hindus. The first chapter in this book is titled “Too Big! Too Small!”. In this chapter, the kids are taught to speak mother as a new word. The meaning of mother is given as Ammi and that of a father is given as Abbu. Another chapter in this book is titled as “Grandpa Farouk’s Garden”. Yogesh Renwal, the state co-convener of the Bajrang Dal, said that he has been receiving calls from many parents about the book being taught in this school and they are complaining about the excessive use of words related to other religions.

The incident occurred during a period when there is a major controversy in Jharkhand as a result of more than 100 government-run schools rearranging the weekly off from Sunday to Friday, purportedly without consent from the administration, in Muslim-dominated sections of the state’s Jamtara district.