Nagaon (Assam) : A man who played Lord Shiva in a street play was arrested in Nagaon on Sunday for allegedly hurting religious sentiments. Birinchi Bora, 38, dressed as Lord Shiva was protesting against rising fuel prices and unemployment in the street play. He was arrested based on the FIR lodged by Bharatiya Janata Party (BJP) workers.

“An accused who dressed up as Lord Shiva was arrested. He will be presented in court. Two others, suspected to be involved are yet to be nabbed,” said Nagaon Sadar police station in-charge Manoj Rajvansi. However, Bora was later granted bail.

“The accused has been granted bail. He has been given notice and released,” Leena Doley, Superintendant of Police, Nagaon told ANI.

38-year-old Bora, in his defence, said that skyrocketing fuel prices have added woes to the people.

“Fuel prices have skyrocketed. Due to the woes of the people, I have been compelled to come down from the heavens. On top of that, there is a major unemployment problem as well. How are the common people expected to survive?” Bora asked.

Bora along with another activist who dressed up as Goddess Parvati was seen riding a bike in protest against fuel prices, unemployment and other issues.

“They dressed up as Lord Shiva and Goddess Parvati. If you want to protest, sit and do it. We do not support their act of dressing up as deities. So, the BJP lodged an FIR,” BJP worker Raja Pareek told ANI 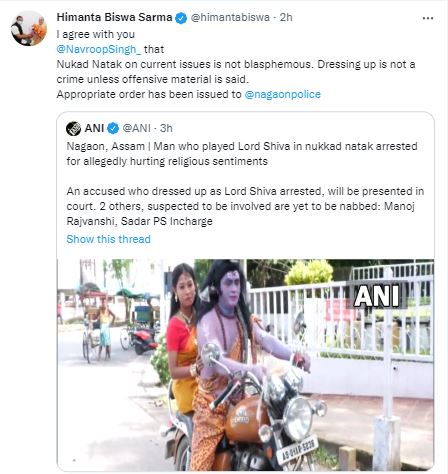 Meanwhile, Assam Chief Minister Himanta Biswa Sarma said that “Nukkad natak on current issues is not blasphemous. Dressing up is not a crime unless offensive material is said. Appropriate order has been issued to Nagaon Police,” said Sharma.