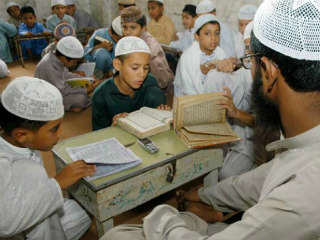 According to a Worldwide Education Monitoring report published by UNESCO, it was found that madrassa graduates had less positive opinions of women with higher education and working mothers, believed that the primary role of wives was to raise children, believed that God ordained Determined the ideal number of children, and expressed the desire for larger families.

“Several decades ago gender inequality in education was high in many Muslim-majority countries in Asia. Significant progress has been achieved in increasing access and bridging the gender gap in partnership with non-state faith-based providers. Girls in madrassas The increase in enrollment of women helped reduce social constraints on women’s mobility in conservative rural areas, where madrassas have been a low-cost platform for achieving universal education,” the report said.

“Madrasas may also nullify some of the positive impacts on gender equality by increasing education access. First, their curriculum and textbooks may not be gender-inclusive, instead reinforcing traditional narratives on gender roles, as in Bangladesh, Studies have shown in Indonesia, Malaysia, Pakistan and Saudi Arabia. Second, their teaching and learning practices such as gender segregation and gender-specific restrictions on social interactions may leave the impression that such gender-unequal practices are social. forms are more widely accepted,” it said.

According to the report, teachers may lack the training to address gender issues and may act as negative models, for example influencing students’ attitudes towards fertility.

“Fourth, more traditional institutions may have progressive role models and restricted environments with limited exposure to the media. Reproduction of traditional gender norms discourages participation in further education and employment. What happens inside faith-based institutions, This has implications for the persistence of patriarchal norms and attitudes in the society,” it said.

“While madrassas generally follow a curriculum that promotes a religious way of life, the situation is not the same within and between countries. Some countries integrate madrassas with government curricula while others are traditional Stick to the model.”

“A study comparing female secondary school and madrasa graduates found that the latter had less favorable attitudes toward higher education for girls and working mothers, with children as the main responsibility of wives, they believed. was that the optimum number of children depended on God and indicated preference for larger families.

“Further analysis suggested that madrasa students, especially from unaccredited institutions, had a less favorable attitude about women and their abilities than their peers in secular schools. Families of teachers in traditional madrasas were significantly larger. were found,” it said.

“Their unique cultural and institutional histories, which often blur the boundaries between state and non-state institutions, further complicate analysis. Differences between them may include the ideology followed, on the scriptures and the Islamic sciences. It may be emphasized, the presence of daily rituals, boarding arrangements and attachment to local mosques. These significant differences mean that experiences are country- and even school-specific,” the report said.