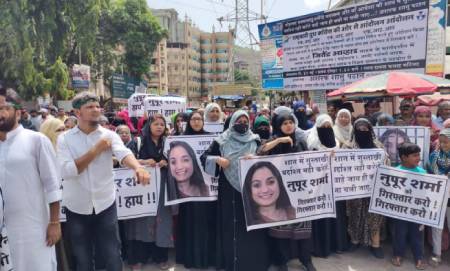 It has been 8 years since the Congress rule ended and the BJP came to power in India. Hindus expected that with the change inf government, attacks on Hindu Dharma and Hindus by jihadis and terrorists would be curbed and the attackers would be severely punished. This expectation has been met to some extent; but the bulk of the attacks continue, as can be seen from the incidents in Kashmir. The last 8 years have shown that the total eradication is impossible without eradicating the jihadi mentality in Kashmir and destroying Pakistan, which provides all kinds of assistance to jihadi Kashmiris. Hindus have been forced to flee Kashmir due to a handful of terrorists. Therefore, Kashmir is still a dream to Hindus. Before the Kashmir incidents, the Gyanvapi issue came to light and Shivlings from the ancient Kashi Vishweshwar temple were found there. The Muslims tried to strengthen their claim on Gyanvapi by calling it a fountain; but the reality stands exposed. It will be clearer when the court decides on this; however, calling the Shivling a ‘fountain’ has hurt the feelings of Hindus. Not only that, a hole was drilled into it to claim that it is a fountain. This is gross denigration of the Shivling. The place where this Shivling was found was not only used for wazu (cleaning the hands and feet before namaz), but also to rinse their mouth. No one is taking into account the gravity of this great insult to Hindus. On the contrary, the muslims continue to maintain that it is a fountain. This is exactly what irked (former) BJP spokesperson Nupur Sharma and she shared points from sacred Islamic texts. The points shared by her were from recorded and revered texts pertaining to Prophet Muhammad; however, the Muslims claimed that the Prophet had been insulted and lodged complaints against her in some places while riots broke out in Kanpur. The Islamic countries of Qatar, Iran, Pakistan, Afghanistan and Kuwait summoned the Indian ambassadors on the issue. Then Nupur Sharma was suspended from the party by the BJP for maintaining the country’s ‘secular image’ globally. Explaining the above to the Islamic countries, India made it clear that the “statement was not the official stand of the Indian government”. Nupur Sharma, unconditionally withdrew comments while offering an apology to all those who had been offended while also being perfectly clear about the circumstances under which she made the comments. Earlier when the matter was heating up, Nupur Sharma had lodged a complaint with the police alleging that the “video” of her statement had been deliberately edited and aired by Alt News co-founder Mohammad Zubair. This suggests that Nupur Sharma was targeted. At the same time, if the police had taken action against Mohammad Zubair and stopped the airing of the video, any attempt to create tension across the country could have been prevented. The question is, will the police act against Alt News’ Mohammed Zubair soon? Not only that, the controversy has earned Nupur Sharma rape and death threats from fanatics. But there has been no action, who is answerable for this?

Hindus booked; But not Muslims!

The Congress government in Rajasthan has not taken any action against Maulana Mufti Nadeem Akhtar, who threatened to maim and blind Nupur Sharma, apart from a toothless notice. However, a few months ago, the BJP government in Uttarakhand registered a case against Yati Narasimhanand, Jitendra Tyagi (formerly Wasim Rizvi), for allegedly making provocative speeches in a Dharma Sansad. Tyagi was arrested and imprisoned for a few months. This indicates that ‘Congress backs Muslims, while BJP takes immediate action against Hindus’.

When will India question Islamic countries?

Just as Qatar, Kuwait and Iran asked India to clarify her stand on Nupur Sharma’s statement, so too should India ask these Islamic countries how many times in the last eight years they responded to the attacks on Hindus and Hindu Dharma on their soil. The question arises in the minds of Hindus and their organizations as to why the Indian government is not as vigilant and strict about the religious beliefs of the majority Hindus as these Islamic nations are about the contempt of the religious beliefs of their majority. In Pakistan and Bangladesh, the religious beliefs of Hindus and Hindus are constantly being attacked. There is no denying the fact that India does not seem to have done anything to stop this and that Hindus do not think that India will do anything from now on. M.F. Hussein drew obscene pictures not only of Hindu deities but also of Mother India. He then fled to Qatar to escape the ire of Hindus. Qatar sheltered him and he died there. At that time, neither did Qatar consider the religious sentiments of Hindus nor did the then Congress government summon the Qatari ambassador. India should use this Nupur Sharma episode to revisit her domestic and foreign policies.