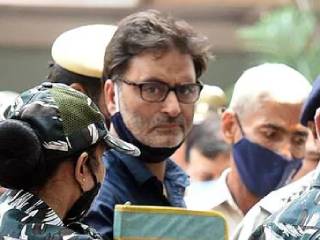 Kashmiri separatist leader Yasin Malik was on Wednesday sentenced to life imprisonment by a Delhi court in connection with a terror funding case. Malik had earlier pleaded guilty to all the charges, including those under the stringent Unlawful Activities Prevention Act (UAPA) in the case. The NIA court awarded life imprisonment based on section 121 (waging war against India) of the IPC and section 17 (raising funds for terror act) of the UAPA.

The National Investigation Agency (NIA) had sought death penalty for the separatist leader.

Malik has also been fined more than Rs 10 lakh as the court imposed different amounts for different sections he has been booked under.

Malik was earlier brought to the courtroom amid heavy security cover, and personnel from the paramilitary forces and Delhi Police were also deployed inside the courtroom.

Special judge Praveen Singh had on May 19 convicted Malik and directed the NIA authorities to assess his financial situation to determine the amount of fine likely to be imposed. Malik was facing a maximum punishment of the death penalty, while the minimum sentence for the offences committed by him is life imprisonment.

Earlier on Wednesday, Malik had said in the court that ever since he renounced violence, he has “followed the principles of Mahatma Gandhi”. Malik also said he had met seven prime ministers of India and challenged that no intelligence agency will be able to prove that he was wanted in any terror activity post-1994 when he gave up guns.