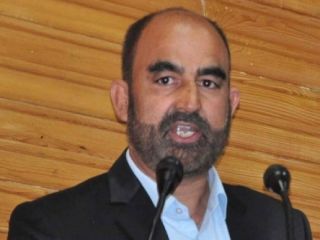 Former Jammu Kashmir Liberation Front (JKLF) Terrorist and Professor of Chemistry at Kashmir University, Altaf Hussain Pandit, has been sacked from his post on Friday. The decision came after Altaf Hussain Pandit’s links with terror groups were exposed.

It has been learnt that Pandit was an active terrorist with JKLF from 1990 to 1993. Despite his exercises in terrorism, he served as an executive member of the Kashmir University Teachers’ Association (KUTA) from 2015-17 and was its vice-president from 2017 to 2018. Pandit was involved in organising student protests against the Indian State, especially after the killing of Hizbul terrorist Burhan Wani in 2016.

Under Article 311 (2) C, the J&K government’s designated committee was scrutinizing cases on separatists active in the state. The committee recommended Pandit’s termination after it was found that he did not go through the formal character and antecedent verification which is a mandatory requirement for government employees joining the service. A senior officer revealed that Altaf Hussain Pandit was one of the several others who managed to enter the public employment system despite challenging the security of the state because the system itself had become heavily contaminated.

Infamous as the ‘Geelani of Kashmir University’, Pandit peddled his separatist propaganda among the students in the university through his academic work. According to the dossier, Pandit often synchronised the university’s academic calendar with that of Hurriat’s Protest calendar in order to mobilize students toward secessionist agenda. He motivated students to join violent protests against the Indian administration and Army funded by separatist elements backed by Pakistan. He was reportedly surprised by the fact that no university student was killed during the 2016 protests after the killing of Burhan Wani.

The dossier by the investigation committee reveals that Altaf Hussain Pandit ran an anti-India cartel at the Kashmir University. For carrying out a separatist agenda for Pakistan and its local proxies in Kashmir, “Altaf was not a potential but a real danger,” according to an officer who has accused Pandit of influencing thousands of young minds in the university.

Who is Altaf Hussain Pandit?

Altaf Hussain Pandit, a separatist masquerading as a University professor, holds a PhD in Applied Chemistry from the Aligarh Muslim University. He joined as an Assitant Professor at Kashmir University in 2004. Brought up in the village of Wadoora in Sopore, Pandit was under the strong influence of Jammat-e-Islami since childhood. During his years as an active terrorist in the valley, he even crossed the LoC for arms training in Pakistan and returned to Kashmir in the same year when he was arrested. Further, he went to pursue higher studies at AMU while his association with JeM continued.

Pandit used to take the help of his like-minded colleagues and student in carrying out his operations at the University. Action against Altaf Hussain Pandit comes days after five government employees in the J&K administration were sacked in March this year over similar charges. It was revealed that the officers working under various departments were working as overground workers for the terrorist outfits. In April, Sheikh Showkat, Pro-Pakistan Principal of Kashmir Law College was removed after his association with tendentious personalities like Syed Ali Shah Geelani, Arundhati Roy and Prof. SAR Geelani were exposed.