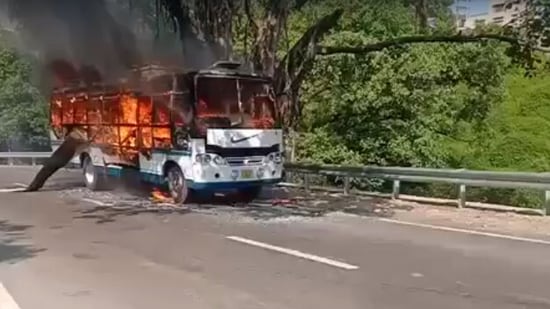 A sticky bomb may have been used to carry out the attack on a bus packed with pilgrims in Katra, sources told India Today TV. A team of the anti-terror probe agency National Investigation Agency, or NIA, visited the spot today and inspected the bus.

“J&K Freedom Fighters”, a terror group, has taken responsibility for the attack.

Four people were killed and 24 injured when a bus with pilgrims on board caught fire on Friday, May 13. The bus was on its way to Jammu from Katra when it caught fire near Kharmal, about 1.5 km from Katra. It is to be noted that Katra is the base camp for the pilgrims visiting the Vaishno Devi shrine.

As per the preliminary investigation, the blaze started from the engine area, which soon engulfed the whole bus.

Two people died on the spot while the injured were shifted to Katra for treatment.

Condoling the incident, Jammu and Kashmir Lieutenant Governor Manoj Sinha said, “Extremely pained by the loss of lives in the tragic bus incident in Katra. I offer my deepest condolences to the bereaved families and prayers for the speedy recovery of the injured. Directed district administration to ensure the best possible treatment for the injured.”