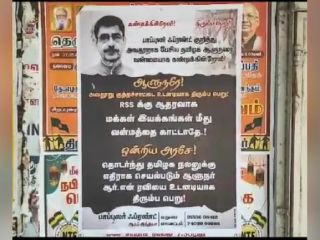 Posters criticising the Tamil Nadu Governor RN Ravi, calling him an RSS supporter, were seen pasted on walls in Madurai on Thursday, May 12. This was reportedly carried out by the Popular Front of India (PFI) after the Governor, on May 6, had said that the PFI was a dangerous organisation and it was trying to destabilise the country.

“Withdraw your statement, Governor. Don’t spew venom against people’s organisations in favour of the RSS,” mentioned the poster. “Go away Governor RN Ravi, who is acting against the interest of the people,” was also written on the poster.

The poster is believed to be a retaliation for Governor RN Ravi’s earlier comments during a book release function in Chennai where he stated certain organisations were trying to destroy communal harmony in India.

The Governor had also stated that the Popular Front of India (PFI) is a dangerous organisation. On May 6, while speaking at a book launch event on Friday, Governor RN Ravi said, “PFI takes up the mask of human rights, rehabilitation, student groups and political parties. (But) the sole aim of PFI is to destabilise the country.”

Governor Ravi made the statement during the book launch of “The Lurking Hydra: South Asia’s Terror Travail”.