A fresh application has been filed in court by the family of Satish Tikoo who was murdered by terrorist Bitta Karate, seeking to place on record Karate’s shocking confession that Tikoo was the first Kashmiri Pandit he had murdered.

The family will submit the footage of the interview before a Srinagar court tomorrow as evidence. The application, filed by advocate Utsav Bains, will be heard by the court along with the video footage and transcript of the televised confession.

Video from India Today’s ‘Newstrack’ show will be placed as evidence before a Srinagar court today in the Farooq Ahmed Dar alias Bitta Karate case. 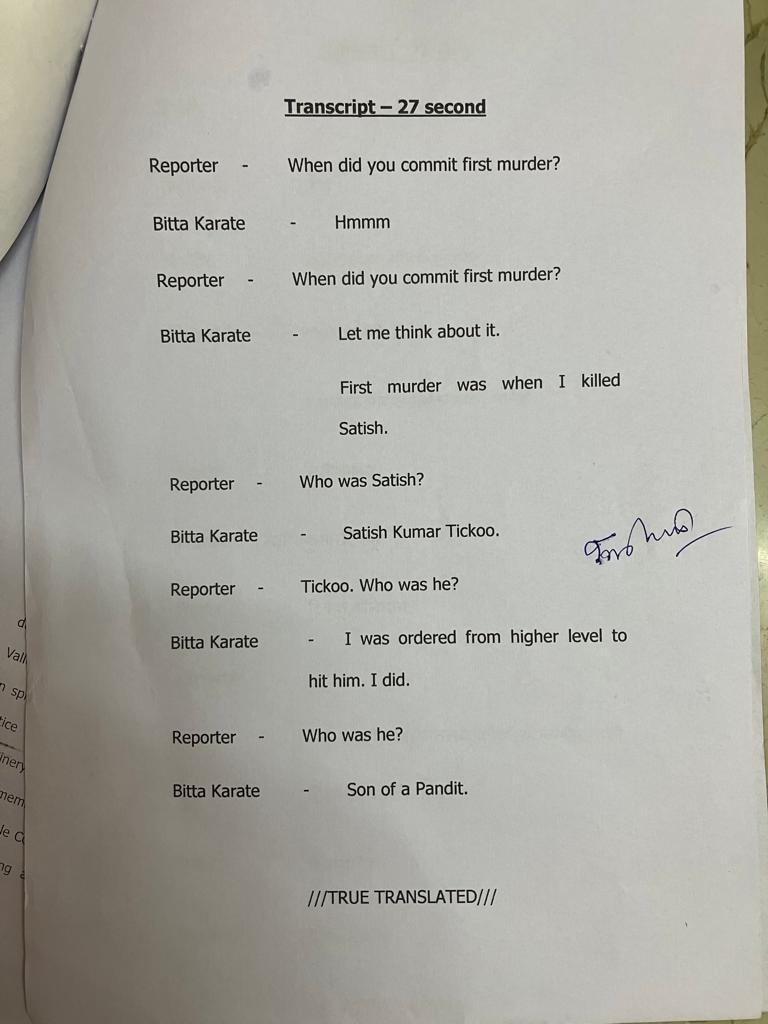 Farooq Ahmed Dar, also known as Bitta Karate, was one of the biggest enforcers of Pakistan’s diktat “raliv, galiv ya chaliv (convert, die or leave). Karate is a free man for years and heads the Jammu and Kashmir Liberation Front (JKLF) – the outfit which led the targeted killings of Kashmiri Pandits.

The targeted killings of Kashmiri Pandits systematically began in January 1990, soon after then Union Home Minister Mufti Muhammad Sayeed’s daughter Rubaiya was kidnapped. This ended with the release of dreaded terrorists. Bitta Karate led the attacks and was the main hitman for the Jammu and Kashmir Liberation Front (JKLF) until his arrest in June 1990.

Bitta Karate, who was interviewed while he was in detention in 1991, said that he had become a terrorist “because I was harassed by the local administration”. He became an “enemy” of the Indian state, and crossed the border to receive training in Pakistan, where the trainers ‘did not trust the terror recruits and were shifted from one place to another blindfolded’, he said.

Why? “Because I got orders from the above.”

“Satish Kumar Tickoo was the first person I killed. I got orders from above to kill him. He was a Hindu boy He was possibly from the RSS (Rashtriya Swayamsevak Sangh) (It was not a choice). I got the order to kill him, he was to be killed,” Bitta Karate had said.