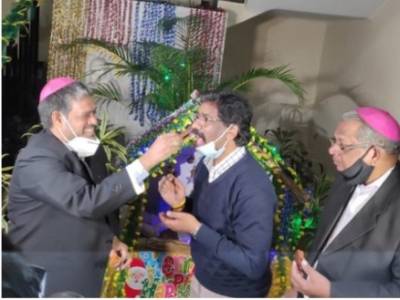 Jharkhand has experienced a surge in religious conversion by Christian missionaries over the years. The state’s strong Christian missionaries, active in small towns and villages, threaten the impoverished and vulnerable locals, particularly those from the Scheduled Castes, with severe consequences if they do not comply with their demands. Many eventually succumb to the pressure and convert to Christianity. Recently, a new controversy over unlawful religious conversion had emerged, in Jharkhand where local Hindus and Sikhs have accused one Ravi Singh, a Christian pastor of running a mass conversion racket in the state.

On February 27, members of various Hindu organisations and Sikhs staged a protest against Ravi Singh’s ‘Changai Sabha’ (‘Changai’ means supposedly curing ailing people through prayers recited by a pastor) in Nanak Nagar in Tinplate under Golmuri thana in Jamshedpur, Jharkhand.

The protesters accused Ravi Singh and his wife of holding the so-called ‘faith healing service’ on Sundays at their house and converting gullible tribals. They demanded the immediate arrest of pastor Ravi Singh, who they said had been targeting vulnerable tribal people and luring them into religious conversion.

People from Hindu and Sikh communities accused the police and the JMM/Congress government headed by Hemant Soren in Jharkand of failing to take action against the accused pastor despite several complaints. Reports suggest that owing to the rising protests, the police had briefly detained Ravi Singh, however, released him later in the evening.

Incidents of conversion have risen dramatically in Jharkhand

The conversion incident in Golmuri is not the first. The Sikh community had visited DC and SP earlier in September 2021 in the same Golmuri and sought action to stop the conversion incidents. According to Sardar Shailender Singh, head of the Jharkhand Gurdwara Management Committee, the administration gave no attention to the complaint lodged by them against the looming issue of mass conversion in the area.

Similarly, in December 2021, there were reports of the conversion of 30 tribal families in Gumla, Jharkhand’s Gadtoli block. Families who did not convert reported receiving social boycotts and death threats. Reports further stated how these two families had particularly been tortured to bow down to the demands of these Christian conversion gangs. One family belonging to that of a person named Salik Gop was reportedly ostracized by the Christian villagers for the last 6 months for not concurring with the demands of religious conversion. Speaking to the media, Salik Gop’s family claimed that, despite being a family of cowherds, they are constantly pressured to eat beef.

Likewise, in 2020 a Santhali tribal man identified as Ramesh Hansda, a resident of Sopodera village in Parasudih district, Jamshedpur had confessed how a Christian pastor had pressurised him not only to embrace Christianity but to also cook and eat cow-meat. “Only after my wife vehemently refused to indulge them did those people leave”, said Ramesh. He said that the priest kept nagging him for almost two years, saying that he would help him financially if Ramesh agreed to embrace Christianity. In this case, too, no concrete action was taken by the Jharkhand police.

In November 2021, in Ganjudih Tola in the Kuju OP area of ​​Jharkhand’s Ramgarh district, villagers held six people, including a woman who had come to convert, and handed them over to police. The conversion gang had reportedly lured a family into embracing Christianity by saying that they would be blessed with a son if they convert.

It may be recalled how in the month of September, OpIndia reported about a woman health worker of Jamdih village of Gumla district of Jharkhand approached the police with a complaint against the Christian villagers, accusing them of torturing her family members to accept Christianity. The complainant, who belonged to a Scheduled Caste, had also alleged that the assailants even sexually abused her daughter to mount pressure on the family to adopt Christianity. She had also said that accused persons instigated the villagers against her family.

It is shocking that the majority of the events have occurred in the presence of police officers, who did little to prevent them.

Illegal religious conversion had also been a thriving clandestine activity in Jharkhand during the Covid crisis. In June 2020, two dozen families under Jharia, Dhanbad, were converted in the pretext of rehabilitation. Hindu organisations staged a ferocious protest in response to the incident. Then, the BJP MLA from Sindri Inderjit Mahto had claimed that missionary activities intensified ever since the JMM/Congress government headed by Hemant Soren came to power in the state.

In Jharkhand, though conversions are officially illegal, the Christian missionaries have been taking advantage of the administration’s complacency. On February 27, OpIndia contacted ADM Jamshedpur to inquire about the Golmuri incident in Jamshedpur, but we were asked to speak with the DC or SP instead.

On February 28, the SP City of Jamshedpur told OpIndia that there had been no progress in the case. According to the SHO of the Golmuri police station, a total of four cases have been filed in this matter. In these four cases, both sides (Ravi Singh and those who accuse him) have filed one case, each, against each other. The rest of the two cases have been filed by the administration. No one has been arrested yet.

According to a report, a young man committed suicide in Pannatand Ravidas Tola of Hunterganj Panchayat in Chatra district of Jharkhand in February 2021 after his mother converted to Christianity. The police had ruled out the incident as a suicide, according to a local portal.

According to a report published in August 2021, the police and government took no action after being informed about the criminal activities of Christian missionaries in the Daru area of Hazaribagh. The missionaries were then accused of enticing more than 200 tribes to convert.

‘Chief Minister Hemant Soren is an admirer of Christian missionaries’

It’s worth noting that in Jharkhand, a coalition government is currently in power, led by Hemant Soren. This government also includes Congress and the RJD, in addition to the Jharkhand Mukti Morcha (JMM). Their government was formed in December 2019. Following the creation of the administration, BJP officials claimed that conversion activities increased dramatically in the state.

Addressing the inaugural day of the two-day golden jubilee function of Gossner College in Ranchi, as the chief guest on Wednesday, Soren said: “If we look at the level of education and work done in the academic sphere in the state, the missionaries have contributed more than 50 per cent. There was tremendous cooperation for tribals, backwards, minorities and poor in the missionary schools.”

The chief minister continued its praise by claiming, “Missionary school and college impart education with discipline with a thrust on social values. The result can be seen from Gossner College which has had 27 departments and thousands of students representing the state across state and country.”

During the Covid crisis too, Soren went on to praise the missionaries’ efforts on behalf of tribals, backwards, minorities, and others.

Hemant Soren has also been quite vocal against the arrest of Stanislaus Lourduswamy, popularly known as Stan Swamy on terror charges by the National Investigation Agency (NIA) in October 2020 in connection with the Bhima Koregaon violence case.

Stan Swamy, an Indian Roman Catholic Jesuit priest, had been involved in anarchic activities for quite some time. However, his anti-India activities came to the fore after his role in the Elgar Parishad in 2018 surfaced during the investigation.

According to the NIA, Stan Swamy was a key conspirator in the Bhima Koregaon Elgar Parishad case of 2018, which witnessed violence, stone-pelting, and arson at Shaniwar Wada in Pune.

Not only this, in October 2021, Soren had paid his tributes to Naxal sympathiser, and Elgar Parishad-Bhima Koregaon violence accused Stan Swamy, saying his alleged sacrifices and “invaluable contribution” to society will always be remembered. Paying his tributes, Hemant Soren compared the deceased Naxal sympathiser to tribal legend Birsa Munda to claim that Jharkhand never lagged behind when it comes to making sacrifices, whether it was Birsa Munda or Father Stan Swamy. The Jharkhand Chief Minister Hemant Soren said people like Stan Swamy would be remembered for their “invaluable contribution to society”.

In fact, on December 25, 2021, on the occasion of Christmas Eve Hemant Soren had visited the Archbishop’s House, Purulia Road, Ranchi and the two had together cut a cake and prayed to Lord Jesus for peace and prosperity for all the people of the state.

Interestingly, in 2020, Ranchi Archbishop Felix Toppo had urged Soren to appoint a Christian minister in his cabinet to look after the interests of the minority community. He had made this demand as a Christmas gift. According to the bishop, the Christian minister could better understand the feelings of Christians. At that time the BJP had called it a hidden agenda of the Hemant government.

OpIndia spoke to Jharkhand BJP State General Secretary Pradeep Verma regarding the rampant religious conversion by Christian missionaries in the state. Verma said, “Christian missionaries have grown unmanageable since Raghubar Das’s government left and Hemant Soren’s government came to power. Previously, permission to convert someone to a different religion had to be obtained from the District Magistrate. However, no one is now abiding by the law. Conversion to Christianity is now taking place under the protection of the state. Complaints are no longer investigated by the police administration. Previously, religious conversion occurred in secret in remote areas, but it is now occurring publicly in towns such as Jamshedpur. The missionaries do not fear anyone now,” said Verma.

Addressing the meeting, Bansal said that the vicious cycle of dividing Jharkhand is being run by the anti-national conspirators and enemies of tribal culture.

He said that in many districts of the state including Hazaribagh, Jamshedpur, Latehar, Pakur and Sahebganj, religious conversion activities are being carried out by illegal churches. In the name of a healing assembly, efforts are being made to divert the innocent people from their ancient Sanatan Hindu religion and culture.

Earlier on February 28, VHP spokesperson Vinod Bansal accused the Hemant Soren government of turning a blind eye towards the rampant incidents of illegal conversion taking place in his state. He said that “Healing congregations, which these hypocrites call prayer meetings, have become unauthorized centres of relgious conversion across India, including Jamshedpur. Applying breaks to such illegal practices is necessary,” Bansal wrote in his Tweet.

In April 2021, the former Chief Minister of Jharkhand Raghubar Das accused the incumbent Jharkhand Soren administration of dancing to the tunes of the Christian missionaries’ in the state. Claiming that Hemant Soren was born with a golden spoon in his mouth, Das had accused him of supporting missionaries, which he described as “anti-national forces”.

“There has been a rapid growth of conversions during the nineteen-month tenure of Jharkhand Chief Minister Hemant Soren ji,” Jharkhand BJP leader Sunil Tiwari wrote on July 17, 2021, while sharing some newspaper clippings. “Soren ji, who came to power on a populist promise to create five lakh jobs in a year or go down from politics, is silent on the issue of conversion development,” said Tiwari.