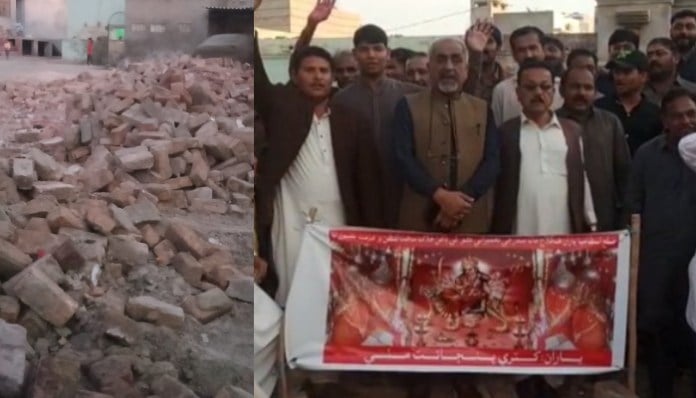 In yet another attack on the minority, the Pakistan Islamist radical on Sunday razed to ground the construction of Hinglaj Mata Mandir in Tharparker district of Sindh province. According to the reports, the temple construction has been attacked 10 times before in past 22 months as Islamists in Pakistan are upset over a new Hindu temple.

The Pakistan Hindu Mandir managment condemned the attack and said that the Islamist radicals were not even afraid of the Pakistan Supreme Court and the Pakistani Government. The local residents also protested against the episode and portrayed their fear of losing Hindu culture.

We should not have let this area go in 1947. It geographically and demographically made sense to incorporate this border area, and you could take out districts from Sindh; it need not be entire provinces. May Hinglaj Mata forgive us. And may she destroy Adharma with her Shakti 🙏🏾 https://t.co/EDmRRjC0Jf

It is important to note that in 2021, the Pakistan Supreme Court had slammed the authorities for failing to stop the demolition of a Hindu temple in a remote town of Pakistan. “A Hindu temple was demolished, and just think what they must have felt. Imagine what would have been the reaction of Muslims, had a mosque been demolished,” the Chief Justice had said when hundreds of people with sticks had attacked a Hindu temple in Bhung of Rahimyar Khan district and the authorities had backed it by saying ‘it was to protect the Hindu families staying around the temple’.

The International community has also repeatedly slammed Pakistan for not taking stringent measures to protect its minority communities, despite the country’s Prime Minister Imran Khan vowing to protect them on numerous occasions. Khan had called the act of attacking Hindu temples as ‘unIslamic’ and had said that he would allow religious freedom to minorities and protect their places of worship. However, continuing attacks on minorities narrate a different story.

According to the reports, the minorities’ rights commission in Pakistan has revealed the dark side of the country. The paper published by the commission has held the Evacuee Trust Property Board (ETPB) responsible for the ailing condition of Hindu temples and asked them to maintain the ancient sites of the minority community.

The report submitted to the country’s Supreme Court last month presents a general picture of decay and obliteration of two of the four most revered evacuee sites in Pakistan. According to it out of 365 temples, the statutory body was managing only 13, left 65 with the Hindu community and abandoned the rest of temples.

Hinglaj Mata is worshiped by Hindus and is the Kuldevi of Kshatriyas. The main old temple of the goddess is located in Pakistan where its survival is a challenge since for years now. In 2012, the Islamists had abducted the chairman of the temple committee two days before the annual Hinglaj Yatra. He was kept in captivity for 73 days and later released. The Pakistan Hindu Council had then strongly criticised that his kidnapping was to warn the Hindus residing in Pakistan.

Also, in year 2020, during Navratri, the unidentified miscreants had damaged the head of the idol of Hinglaj Mata, besides smashing the face of Her Vaahan.