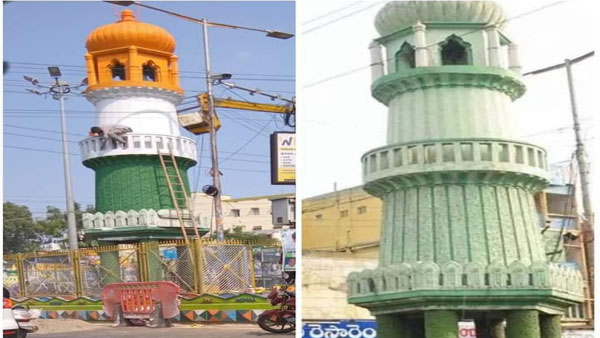 Amaravati, Feb 02: The Jinnah Tower in Andhra Pradesh’s Guntur has been painted in Tricolour amid the controversy which erupted on January 26, on the occasion of Republic Day.

“On the request of various groups, it was decided to decorate the tower with the tricolour and to construct a pole to hoist the national flag near the tower,” news agency ANI quoted Mustafa as saying.

Y Satya Kumar, BJP’s national secretary, tweeted: “Painting the Jinnah Tower with tricolour will still not change the colour of your heart, Mr @ysjagan , which unfortunately, is still green with a crescent. Pay heed to people’s demand & change the name of Jinnah tower!”

Painting the Jinnah Tower with tricolour will still not change the colour of your heart, Mr @ysjagan, which unfortunately, is still green with a crescent. Pay heed to people's demand & change the name of Jinnah tower! pic.twitter.com/M50wIRoWU8

The BJP leader also described this as the BJP’s win over ‘pseudo-secular and anti-national forces’, and posted: “BJP & the nationalist forces will not rest until the name of Jinnah is removed and same is named after Dr Abdul Kalam or Sri Gurram Jashuva.”

Tension prevailed in the area on Jan 26 as some persons claiming to be from the Hindu Vahini outfit tried to march to the Jinnah Tower Centre in the city and hoist the tricolour, even as a large posse of police personnel was posted there to prevent such an act.

For some time now, the BJP and other Hindu organisations have been demanding that the Jinnah Tower, a pre-Independence era monument in Guntur, be renamed. They threatened to demolish the structure if the Jagan Mohan Reddy government did not pay heed to their demands. On January 26, as the nation celebrates its Republic Day, The Guntur Police has arrested members of the Hindu Vahini trying to unfurl the Indian National flag at the ‘Jinnah Circle’ in Guntur. The Hindu Vahini had announced to hoist the tricolour on the Jinnah tower in the city, but the Guntur Police has thwarted their attempt while trying to do so.

Tensions rose in the area as some people who tried to climb the Jinnah tower were arrested by the police. In the video that emerged, the Police is seen using force while controlling the people with the tricolour in their hands. It is now learnt that the police has increased the security cover to the tower and has added a fence to prevent anyone from entering the tower.

Mohammed Ali Jinnah Circle, named after Jinnah who created Pakistan is protected by Guntur (Andhra Pradesh) Police as if it is a part of Pakistan.

In any part of India, hosting the tricolour and saying 'Vande Mataram' is Desh bhakti, so how is it a crime in Guntur? pic.twitter.com/SHaQzexULA

This is how police in Andhra's Guntur roughed up a man trying to hoist Indian flag at a circle named after Mohammad Ali Jinnah. They stopped him from unfurling the flag and detained him.
And shameless media is describing it as "ugly scene" created by "right-wing activists" pic.twitter.com/cuv53aa1Iq

The move has sparked strong reactions from netizens. People are questioning the police action against Indian citizens trying to hoist the National Flag on Republic day and are asking why there is still a tower and a circle named after Jinnah in India.

This is totally unacceptable. Police in Guntur just arrested a man for unfurling the Indian flag and raising Vande Mataram slogans at the Mohammed Ali Jinnah Circle, on #RepublicDay .

Are we in Pakistan, @ysjagan? pic.twitter.com/CBfCkc9TPR

The ‘Jinnah’ tower in Guntur is a one-of-a-kind building named after Mohammed Ali Jinnah, the founder of Pakistan. According to some, it allegedly stands as a ‘symbol of peace and harmony in the city. One theory of its origins suggests that Lal Jan Basha, a Telugu Desam Party member felicitated Judaliyaquat Ali Khan, a representative of Jinnah when visited Guntur in the pre-Independence era by building this tower.

However, The state BJP unit leaders have demanded to change the name of this tower saying that it is an insult to the country to have a centre with the name of a ‘traitor’ even after 75 years. BJP national secretary, Y. Satya Kumar and Telangana BJP MLA Raja Singh had earlier demanded renaming the Jinnah tower with APJ Abdul Kalam’s name. Y. Satya Kumar questioned Andhra Pradesh CM Jagan Mohan Reddy over the additional security provided to the tower at a time when a 102-year-old Bhagwan Ram Temple is being demolished in Tenali, Guntur.

While 102 year old Bhagwan Ram Temple is being demolished in Tenali town of Guntur district,

A 76 old year old structure built in the honour of Jinnah in Guntur is being protected.

Is this Jagan’s definition of Secularism ?

BJP leaders from Andhra Pradesh and Telangana have continuously demanded to change the name of the tower by replacing it with that of freedom fighters. The forceful detaining of Hindu activists by Guntur Police to unfurl tricolour on the tower has added fire to the ongoing controversy.