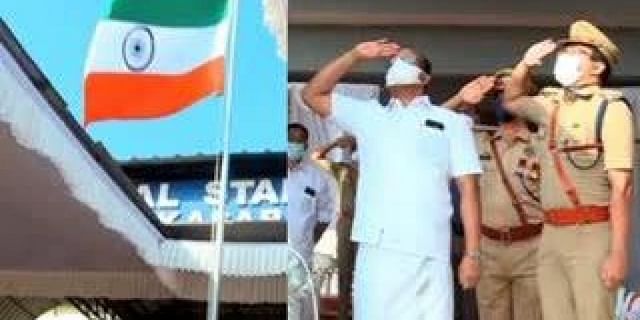 Kasaragod : The Kasaragod district in-charge minister Ahammad Devarkovil was left embarrassed as the National Flag he unfurled at the Republic Day function on January 26, 2022, faced upside down.

The minister for ports and district police chief Vaibhav Saxena, district collector in-charge ADM A K Ramendran, and other top police officers saluted the upside-down flag hoisted at the Kasaragod Municipal Stadium in Vidyanagar on Wednesday.

The mistake was spotted by journalists on duty and alerted the officials.

It’s in Kerala, The one who salute is a Minister & his name is Ahmed Devarkovil

The minister expressed his displeasure to the district police chief and stopped the function till the National Flag was correctly hoisted.

In 10 minutes, the flag was lowered and correctly re-hoisted, and the Republic Day ceremony was reset. The minister saluted the National Flag and went ahead with the inspection of the guard of honour.

The march past was dropped because of Covid restrictions.

On November 1, 2021, during Karnataka’s Rajyotsava celebration in Mangaluru, the ports minister and minister in-charge of neighbouring Dakshina Kannada district S Angara had also hoisted the National Flag upside down. The officials corrected the mistake while Angara walked back to the stage.