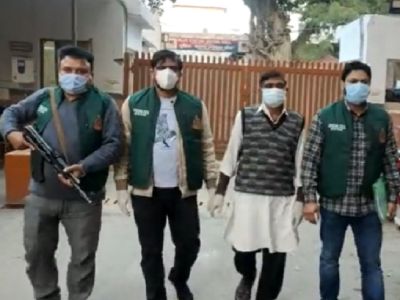 On Friday, the Delhi Police arrested a notorious arms supplier named Hazi Shamim from Muzzafarnagar, Uttar Pradesh in a conspiracy to kill a prominent Kashmiri Pandit Social Activist in New Delhi. The Police has also exposed the Khalistani and Pakistan links in the case and recovered 5 pistols, 20 live cartridges from Shamim.

55-year-old Hazi Shamim, popularly known as Shamim pistol was involved in an assassination plot on a human rights activist Sushil Pandit last year. He was arrested by the Police on Friday after they confirmed Shamim’s role as the supplier of weapons, that emerged during an investigation.

According to the Delhi Police Special Cell DCP Pramod Kushwah, two contract killers Sukhvinder Singh and Lakhan Rajput were arrested in February last year for planning to kill Pandit. During the investigation, the two disclosed that they were hired by Prince Kumar alias Tooti and were promised Rs 10 lakh each. The police had then registered a case against Tooti and arrested two more accused, Jagdeep alias Kaka and Rohit Chaudhary.

The investigation further revealed that Chaudhary’s brother Rahul who is an expert in drone handling was arrested by the Punjab Police for his alleged role in smuggling narcotic drugs into India from Pakistan using drones. “When Rahul was in jail, Chaudhary was contacted by some persons from Pakistan through one Randeep alias Romi, a member of banned terrorist outfit Khalistan Zindabad Force”, DCP Kushwah said.

Reports further mention that Romi assigned the task of killing the Kashmiri social activist to Chaudhary, who asked his associate Jagdeep alias Kaka to arrange someone to do so, and offered him ₹50 lakh. Kaka had already murdered someone in Meerut, Uttar Pradesh, on Chaudhary’s instructions.

Kaka wanted to execute the operation but agreed to Chaudhary who suggested the murder be committed by someone else so that they are not linked to the killing. Kaka sought Tooti’s help, who hired Sukhvinder and Rajput. The two came to Delhi and were provided with firearms and ammunition and a photo of the target. “The two were arrested before they could finish the job”, the police said.

The Delhi Police confirmed that the weapons and bullets were supplied by Hazi Shamim and had attempted anticipatory bail after learning about the arrest of Chaudhary. The bail was however rejected. “Shamim went on the run and a non-bailable warrant was issued against him. He was arrested on January 19,” added the DCP.

Pertinently, Hazi Shamim has been supplying illegal arms for more than 15 years and deals in sophisticated arms including foreign make arms. He has been arrested several times in several cases for operating an illegal venture.

Kushwah said that Police had recovered 30 pistols, one rifle from Shamim in 2014 and also 84 pistols in 2018. It is reported that Shamim procured raw material from Munger in Bihar and assembled the weapons in Muzzafarnagar, Uttar Pradesh.