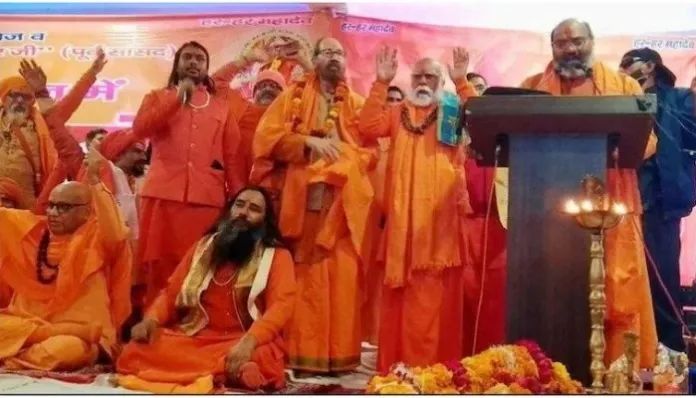 An intervention application has been filed in the Supreme Court by Hindu Sena to oppose a writ petition seeking criminal action against the participants of the 3-day Dharma Sansad conclave, which took place between December 17-19 last year.

As per reports, the application has been moved by Sena National President Vishnu Gupta in response to the writ petition by one journalist named Qurban Ali and advocate Anjana Prakash. He had sought directions from the apex Court to register cases against various politicians like AIMIM leader Assaduddin Owaisi, Waris Pathan, Sajid Rashidi, Amanatullah Khan and Tamper Raza.

Gupta highlighted that the writ petition was an attempt to scandalise Hindu spiritual leaders. He pointed out that the event of Dharma Sansad cannot be treated as an attack on other religions. The applicant argued that the contentious speeches made by the participants of the event were in response to the consistent attacks on Hindu culture and civilisation by non-Hindus and did not fall under the purview of ‘hate speech.’

He added that the remarks made during Dharma Sansad cannot be ascertained as ‘hate speech’ without a detailed enquiry by an investigating officer. The intervention application stated, “The Constitution of India provides equal protection to the followers of all faith and religion, in this context reference may be made to Article 19(1)(a) and (b) read with Article-25 of the constitution of India.”

Vishnu Gupta claimed that conducting of Dharma Sansad by Hindus was protected by Articles 19A, 19B and 25 of the Indian Constitution and objections to it amounted to the encroachment of Fundamental Rights of Hindus. It must be mentioned that a Supreme Court Bench comprising of Justices Hima Kohli, Surya Kant and Chief Justice of India NV Ramana had issued notice on January 12 in the writ petition filed by Ali and Prakash.

It may be recalled that a day after speeches of leaders like Yati Narsinghanand and other Hindu leaders went viral, an FIR was filed in Uttarakhand over the speeches that called upon Hindus to collect arms. The speeches were deemed as provocative and social media was rife with Leftists and Islamists claiming that the speeches called for a Muslim genocide.

Ashok Kumar, DGP, said the police had received a complaint and filed an FIR under Section 153A of the IPC (promoting enmity between different groups on grounds of religion) related to the statements made at the recent Dharma Sansad event in Haridwar.

An FIR was filed against Waseem Rizvi (now Jitendra Narayan Tyagi) and several others involved in the event on the basis of a complaint by one Gulbahar Khan. As per the complaint, Rizvi and some other individuals made derogatory remarks against Islamic prophet Mohammad and the followers of Islam. He was arrested for inciting violence on January 13 this year for Haridwar ‘Dharma Sansad’ hate speech case.