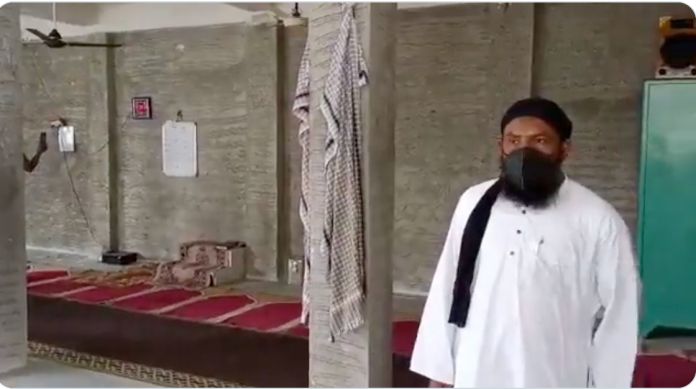 On Saturday a video had gone viral on social media where it was alleged that Bajrang Dal activists had forcefully stopped offering of namaz in a ‘mosque’ in Mora village of Surat in Gujarat.

Soon after, former Surat city Congress councillor Aslam Cyclewala put up a post on his Facebook profile that the structure where the namaz was being offered in the Shiv Shakti society of Mora village, Surat, is a masjid/madarsa registered with the Gujarat Waqf Board.

Cyclewala, in his post said that the place where the namaz was being offered in Chauryasi Taluka’s Kantha area, near Hajira in Surat, one property in the Shiv Shakti society is registered with the Gujarat State Waqf Board as masjid/madarsa. Hence, for all Muslims, this place becomes a ‘holy place’. He said that at this ‘holy place’, the residents had gone to the Ichhapor Police Station and agreed that because of COVID protocol, only the Muslim residents of the society will be allowed to offer namaz at the location currently.

As per the post, in a meeting held on Saturday, PI, PSI and other police officials as well as other prominent residents of Mora village as well as Muslim leaders like Maulana Faiyaz Laturi, Aslam Cyclewala, Khurshid Syed, Maqdoor Rangooni and others had gathered. In one of the videos, a resident pointed out that after the COVID situation is over, the residents of the society will hold a meeting where further decision on allowing outsiders for namaz will be taken.

Earlier this month, Gandhinagar based trust, Ekta Ej Lakshya Committee wrote an application to collectors and heads of 33 districts and urged them to dissolve the state Waqf Board and said that the Board is illegally taking over private, government as well as semi-government properties by misusing the provisions of the Waqf Act, 1995.

“If you were to see the amount of property owned after Indian Armed Forces and Indian Railways, Waqf Board owns the highest such properties. Till July 2020, Waqf Board owned 6,59,877 immovable properties spread over approximately 8 lakh hectares have been registered with the Board,” the letter said.

The Act does not have any provisions for Hindus to protect their property and only considers one community which is against the secular fabric of the nation, the application by the Trust said. “No law or individual is above the constitution but the Waqf Act does not consider the sentiments of non-Islamic community and discriminates against them, thereby violating the Constitution of India,” the letter further says.

The letter further states that the Board has seamless powers which has been often misused and creating problems for a common man. “This kind of illegal taking over of property is like ‘Land Jihad’ and a nationwide conspiracy and hence the partisan law should be removed and made way for a secular nation in true sense,” the letter further said.

According to sources in the know, there is a new modus operandi in rural part of Surat and surrounding areas where properties are transferred to Waqf Board.

“Waqf” means the permanent dedication by a person professing Islam of any movable or immovable property for any purpose recognised by the Muslim law as pious, religious or charitable. This means that any property by a user can be registered with the Board and it becomes ‘waqf’ and it remains so even if the original owner of the property dies.

In the above case, as per the person in the know of things, there were some plots in the Shiv Shakti society in Mora village which were allotted to Muslim owners years ago. One of the plot had a structure constructed on it and the same was being used to offer namaz. In 2020, during the coronavirus pandemic, the owner of the property registered his plot/house with the Wakq Board as madarsa/masjid.

Sources in the know of the things say that the laws of Waqf are one-sided and against the principle of natural justice. Here, anyone can declare any property as waqf property and get it registered. No one asks the neighbours or other parties if such transfer of property which could cause polarisation, communal discord is okay with them. In urban areas, people are alert and hence the Disturbed Areas Act is implemented and there is slight awareness. But in rural areas, the problem persists, the source says.

Even if there is illegal construction being carried out on the property that is registered with Waqf Board, they get the protection from the Board, said a lawyer while speaking to OpIndia.

He further said that as per provisions of the Waqf Board, one does not need anyone else’s permission to get property registered with Waqf Board. If someone writes an application, Waqf Board can take unilateral call. “Usually for transfer of immovable property, like a residential house, one would require permission of society chairperson or the committee and a due process is followed. This is usually done to make sure there are no illegal land dealings. But if your Muslim neighbour tomorrow decides his house is masjid because it is a ‘pious place’ of worship, he can get it registered to the Board and, well, you’ll be living next to a masjid,” he said.