Despite the evidence of jihadi activities taking place inside madrasas and schools of the minority community, still, the Rajasthan government is ready to spend crores of rupees. Due to the one way secularism, minorities are getting large amounts of funds, but what do Hindus get? – Editor, Hindujagruti 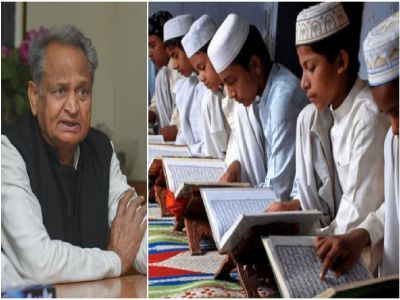 On Tuesday, the Rajasthan government declared that it would spend Rs 5 crore for the construction of boundary walls in waqf land or graveyards, madrasas and schools that belong to the minority community. This is after CM Ashok Gehlot on Monday approved the package of Rs 98.55 crores, especially for the development of the minority community in the state.

Rajasthan CM Ashok Gehlot approved a revised proposal to spend Rs 98.55 crore in various schemes from a fund of Rs 100 crore set up for the inclusive development of the minority community in the state, reads an official statement

The government will also be spending Rs 58 lakhs from state government funds for developing e-study rooms in 15 government minority hostels and Rs 44 crores for infrastructure development in minority-dominated areas. As proposed by Congress, under the Indira Gandhi Urban Credit Card Scheme, the Gehlot government has assigned Rs 5 crore for interest subsidy on loans. It has also decided to look after the development and restructuring of the Maulana Azad University, Jodhpur.

Reports further suggest that a research counter will be set up in the coming period for the upliftment of minorities and the government has sanctioned Rs 2 crore for the purpose. The official statement read that Rs 1 crore would be used for the Minority Meritorious Youth Promotion Scheme. The Gehlot administration has furthermore has decided to uplift the farmers of the minority community. It has proposed to set up a solar pump grant scheme for minority farmers at a cost of Rs 15.42 crore.

In the 2021-22 budget, the Rajasthan government had allocated Rs. 100 crores for the total development of ‘religious tourist circuit’ connecting places of worship of Sikhs, Jains, Hindus, and Muslims in order to develop ‘Sarva Dharma Sama Bhava’. According to the census, there are 13 per cent Muslims in the state who are contended with Rajasthan government’s decision to undertake the development of 9 Muslim religious places under the 100 crore ‘religious tourist circuit’ programme.