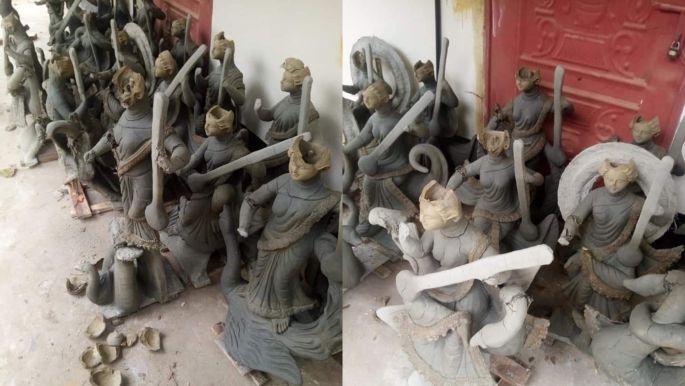 Miscreants have vandalised at least 35 Saraswati idols made for the upcoming Saraswati Puja in Boalkhali of Chattogram.

Similar to an act committed by demons, the idols were vandalised on Friday midnight at the pottery of local craftsman Basu Dev Pal located at Lalar Hat in East Shakpura.

Chattogram Superintendent of Police SM Rashidul Haque confirmed the news and said, “We are looking into the incident.”

Boalkhali police station Sub-Inspector (SI) Sumon Kanti Das said, “Some small clay idols made on the occasion of Saraswati Puja were placed on the side of the road. Miscreants broke the heads and hands of the idols on Friday night.”

He noted that it is still unclear why the act of vandalism took place. “However, it did not appear to be done due to business animosity or religious reasons,” added Sumon.

Potter Basu Dev Pal reportedly told police that no one has business animosity with him.

Shyamal Biswas, president of the Boalkhali Puja Celebration Council, said, “Potter Haripada Pal and his son Basu Dev Pal have been making idols in the area since the Pakistan period. This has never happened before.”

He also demanded justice for the incident.