This is very serious as jihadi mob attacked animal activists in the presence of police personnel ! Now Police should take this issue very seriously and take stringent action against all culprits ! – Editor, Hindujagruti

Mumbai : Aslam Abdul Mulla Qureshi and Salim Qureshi were among the seven arrested by the Mumbai Police on charges of attempt to murder and rioting after two animal activists and police personnel were attacked by a mob of over 40 men at Kasaiwadi in Chunabhatti where they had gone to raid a truck carrying illegal beef, a report published in Times of India said.

As per the report, the police have recovered 5 to 7 tonnes of suspected beef, which has been sent to forensics for verification to ascertain if the meat was indeed beef or not. 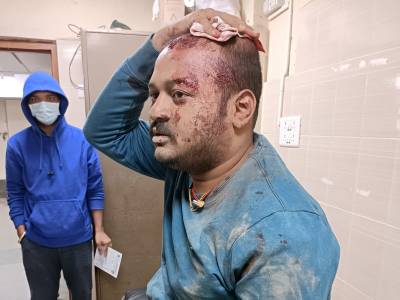 Animal welfare officer Ashish Kamlakar Barik suffered serious head injuries after the bloodthirsty mob pounded him with rods. He was immediately rushed to a nearby hospital. Another activist, Pratik Nanavare, was also hit with sticks on his back. Besides, two police officers were also manhandled by the mob which vehemently protested against the raid carried out on a truck suspected of carrying illegal beef.

“We had a tip-off that a truck (MH03-CV7665) was to head towards Kasaiwada with beef around 6 AM on Sunday. We called up the police for help to raid the truck and seize the beef. Two unarmed police officials accompanied us,” Nanavare was quoted as saying by the Times of India.

Nanavare claims when they reached Kasaiwada, a frenzied mob of over 40 men mercilessly attacked them with sticks and rods. He said Barik was especially targeted and he started bleeding from the head. Nanavare says the bloodthirsty mob also attacked him with sticks and that he is soon going to file a statement with the police.

Bhavin Gathani, another animal activist belonging to Karuna Parivar Trust, a group that works for the welfare of animals, described the attack to be “very serious” in nature. He said the fact that Animal welfare activists were attacked in front of police personnel illustrated the temerity of the smugglers and underscored the menace facing the city.

The incident highlights the rampancy of beef smuggling into Maharashtra, especially in Mumbai. In December 2021, two people, including the brother of a Shiv Sena leader, were arrested by Navi Mumbai police for transporting over 40 kgs of beef.

The police were acting on a tip-off about some people bringing cow meat from Karjat to be sold in Navi Mumbai. The police laid a trap and arrested two individuals who were carrying 40 kgs of beef in a rickshaw for sale.

Earlier in the same month, Police had seized 21,018 KG beef worth Rs. 20.6 lakh in Palghar, a district located 100 KM away from Mumbai. The Police had then said it was being transported from Tamil Nadu in a container truck. Two people identified as 37-year-old Kolinchinath Rajendra Vaniar and 36-year-old Ranjit Kumar Ganeshan, from Ariyalur, Tamil Nadu, were arrested in the case.

Three months before this incident, in September 2021, close to 100 tonnes of illegal beef and buffalo meat was recovered from two places in Gulbarga after a Mumbai-based NGO filed a complaint to the Karnataka state authorities about illegal cattle slaughters taking place along the Maharashtra-Karnataka border, and the illegal beef and buffalo meat being smuggled into Mumbai and Navi Mumbai areas by road.