Why media and secularists are keeping mum on such a burning issue, where a minor Hindu boy is being converted to Islam ? Does these people think that only so-called ‘minorities’ have all rights and Hindus don’t have any such rights ? – Editor, Hindujagruti

Chhattisgarh police have booked a Muslim woman and her family members for forcefully circumcising her minor son against the wishes of her Hindu husband. On 12th January 2022, the police registered an FIR against 3 accused including the woman under non-bailable sections in connection with the case in Sanna in Jashpur district of Chhattisgarh. All the supporters of Ghasi Ghasiya Samaj and former minister Ganesh Ram Bhagat, National President of Tribal Security Forum, had pursued the matter continuously. Jashpur ASP Pratibha Pandey informed the media about the development in the case. 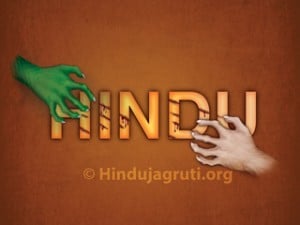 According to the reports, the father of the victim child, Chittaranjan Sonwani, is a resident of village Nagartoli which comes under police station Sanna of Jashpur in Chhattisgarh. Ten years ago he was married to Reshma – daughter of Mehandi Ansari – a girl from Muslim society, with full Hindu customs. The couple has an eight-year-old son and a six-year-old daughter. The whole family was living according to Hindu customs. On November 21, the 8-year-old son went to his maternal grandmother’s house with his mother. Chittaranjan has alleged that his in-laws took the child from Harradipa to Asta and then took him to Ambikapur and circumcised him. Apart from that, the boy was also given a Muslim name.

Initially, Chittaranjan was not aware of this. This circumcision was done secretly, after which several days had passed. It was only a few days ago that he came to know about the development. When the family and people from the community came to meet him and learnt more about the matter, all of them together reached the police station on Monday night demanding action. As the matter was sensitive, the CWC and the officers were informed. After the statement of the child, the police registered an FIR against 3 people.

Jashpur Additional SP Pratibha Pandey has informed that a Hindu youth has complained that his Muslim wife forcibly circumcised their minor son and changed his name to a Muslim name.

As the news spread, the convener of All India Tribal Security Forum and former minister Ganesh Ram Bhagat, Hit Raksha chief Ram Prakash Pandey approached the police station late in the night. People also started gathering in big numbers outside the police station. People were angry about this incident. On Monday, till late night, they sat in a dharna by blocking the road in front of the police station, and then on Tuesday, a large crowd gathered and started shouting slogans against the police. On the one hand, the police were seen acting promptly on this very sensitive matter, while the father of the victim child and the people of the community together put pressure on the police.

After the case was presented before the Women’s Cell, Child Welfare Committee, and ChildLine due to the matter being related to a minor child, finally the Sanna police registered the offence under Section 295A, 324,34 of IPC and Section 3,4 of Chhattisgarh Freedom of Religion Act against the child’s mother, maternal grandmother and maternal aunt Reshma Sonwani, Rashida Khatoon, Hasina Khatoon. The police have arrested the accused mother and the maternal grandmother of the child, the search is on for the aunt.

Chittaranjan – the father of the victim child – has stated in the complaint that he was asked several times by his Muslim in-laws to convert to Islam but he never agreed to acccept Islam. Due to which his wife Reshma Begum and his maternal side’s brother etc. together got his minor son Saurabh Sonwani converted to Islam by circumcising him and giving him a Muslim name.

Politicians take cognizance of the matter

BJP leader Prabal Pratap Singh Judev has recently made a statement about this incident. He has said that it is unbearable to circumcise and convert a son without the approval of the Hindu father. The administration should immediately arrest all the workers involved and stop conversions. Prabal Pratap Singh Judev has been constantly spreading awareness against the return of converts and conversions.