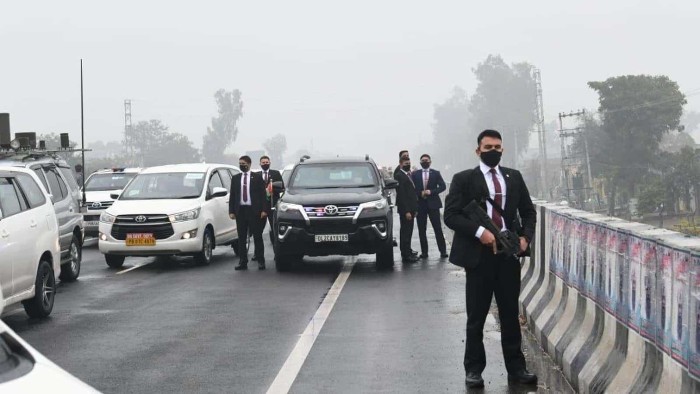 The day of 5 January 2022 could have proven to be extremely dangerous for India due to the serious and unpardonable lapses in the security of the Prime Minister of the world’s largest democracy. Fortunately, nothing untoward took place. The incident took place during the Prime Minister’s visit to the Ferozpur region in Punjab. While en route from the Bhatinda airport to Hussainiwala on the India-Pakistan border in Ferozpur, the Prime Minister’s cavalcade was stranded on a flyover for a whopping 20 minutes! Any tragedy could have struck in this duration. The land of Punjab bearing seeds of turmoil is yet again witnessing chaos being perpetrated by the Khalistanis. The nation saw the prelude to this pandemonium and treason through protests in Delhi, NCR and Punjab to oppose three new farm laws proposed by the Centre. It became increasingly evident that those protesting comprised mostly Jihadis and Khalistanis, as opposed to farmers. The anti-national and anti-farmer protests that continued for two long years resulted in the Centre withdrawing the three farm laws that were in the best interests of farmers. As such, it is the nation’s and the farmers’ ill fate that the farmer issues continue to stay unresolved. The series of events that unfolded gave clarity about the capabilities of Khalistanis that enjoy the support of Canada, the US, the UK and, of course, Pakistan. The serious lapses in the security of the Prime Minister call for the mention of an eerie incident that took place in 1995. The then Chief Minister of Punjab, Beant Singh was assassinated by a suicide bomber belonging to the militant group, Babbar Khalsa International. Barely a month ago, on 8 December 2021, the nation lost its first CDS (Chief of Defence Staff), in a helicopter crash. With not even a month passed since the unfortunate incident, the callous lapses in the security of the Prime Minister have spawned reasons to worry in the minds of the nationalistic. Add to that the upcoming elections in the state of Punjab! In the context of all these, an incident like this exposing the sorry state of the Prime Minister’s cavalcade is perhaps the first of its kind in the history of modern India.

The lapses in the security of the Prime Minister are conducive to attacks from Khalistani terrorists; however, the possibilities of attacks from Jihadi Pakistan cannot be ruled out. The region that the Prime Minister was visiting is situated a mere 10 kms away from Pakistan. In the last two years, the serious security lapses in the state of Punjab, the bomb blast in the backdrop of the state elections, the lynching of two persons for supposed sacrilege, and the surveillance of Pakistani drones in Punjab in the past few days have become subjects of worry. In one incident, it has emerged that a drone even dropped some weapons on Indian soil. From this viewpoint, if the Khalistani and Jihadi forces had joined hands to create a disaster, who would have been responsible for it? The State needs to ponder over this. Perhaps this is why Home Minister Amit Shah clarified, “the security lapses are unacceptable, and accountability will be ascertained.”

The Prime Minister had to cancel his Ferozpur programme and had to embark on a return journey of a whopping two hours ! Now politics over the incident has been triggered. Indian politicians have little shame of the topics they choose to play politics on; the less said about Congress, the better. It won’t be an exaggeration to describe Congress as ‘the official party working for the partition of India’. Congress leader and Chief Minister of Punjab, Charanjeet Singh Channi has shrugged off his responsibility in the incident and made a laughable and highly irresponsible comment stating that the security lapses were caused due to the PM’s last-minute decision to go to the designated venue by road instead of by air. BJP and other national parties are holding Congress responsible for the incident; however, Congress is running away from it. The security arrangements of a VVIP such as the Prime Minister have to be immaculate ! The Prime Minister’s car and its modern hi-tech features often become topics of conversation; however, if there are lapses in the security procedure and if there’s no accountability for the security breach, of what use are these advanced security features ? The Punjab Police was timely intimated about the changes in the Prime Minister’s visit. How the protesting farmers found out the Prime Minister’s route warrants a thorough investigation. The information pertaining to Prime Minister’s visit was restricted to the concerned ministers in the Punjab government, administrative officers, and the top officials of Punjab Police only. Then how did this information get leaked ? An investigation should be carried out in the matter and the guilty be severely punished. The security of the nation and its highest representative is far more important than politics; that the Punjab government and its police are responsible for the security breach cannot be dismissed.