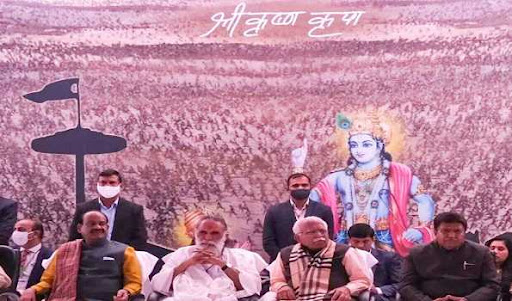 Kurukshetra : Haryana Chief Minister Manohar Lal Khattar said that now students will study Gita even in schools and they will be taught to recite the shlokas of Shrimad Bhagvad Gita in schools across the state from the next academic session.

After this, books related to Gita will be taught in Class V and VII, Khattar announced on Saturday at the International Gita Mahotsava organized in this holy city.

He said that the youth should imbibe the essence of Gita in their lives. The message of Gita was given not for only Arjuna but for all of us.

He said that in order to enhance the scale of International Gita Mahotsav, a Gita Jayanti committee should be constituted from next year. Institutions and other organizations related to the society should be included in this committee. With this, the followers associated with different organizations will also become participants in this programme and the scale of the festival will be bigger.

Mr Khattar said that the pilgrimages of 48 Kos of Kurukshetra are being developed for religious tourism. Buses will be deployed with the help of Tourism Department to connect them. People from country and abroad will come here to learn the history of the Kurukshetra.

He said that a Mahabharata- theme museum is being constructed at Geetasthali Jyotisar on 2 acres of land at a cost of Rs 205 crore. In this building, Shrimad Bhagavad Gita, Saraswati river and Vedic civilization will be depicted through multimedia system.

He said that on the lines of Ramlila, Krishna Utsav would also be organized during the International Gita Mahotsava from next year. In this festival, which lasts from 5 to 6 days, different incidents related to the life of Lord Shri Krishna will be depicted through a tableaux. There will be a light and sound show as well.

Khattar said that till now there were 134 pilgrimage places in the 48 Kos land of Kurukshetra, some places of pilgrimage were left out earlier, this time 30 more pilgrimages have been added to it, after which the total number of pilgrimages has gone up to 164.

He said that the State Government has decided to get development done in places related to Mahabharata. Budget is being given through the Kurukshetra Development Board. Development work is going on at 75 out of 134 places. The demand for the remaining places has been sent, committees have been formed for those as well. The government will not lag behind in completing the work of lakes, toilets and other facilities at these places, and there will be no shortage of budget.

The Chief Minister said that International Gita Mahotsava is being celebrated in foreign countries as well. Earlier the festival was celebrated in Mauritius and UK, however, it was not celebrated elsewhere due to COVID pandemic. However, this year people are definitely connecting with the festival through virtual medium.