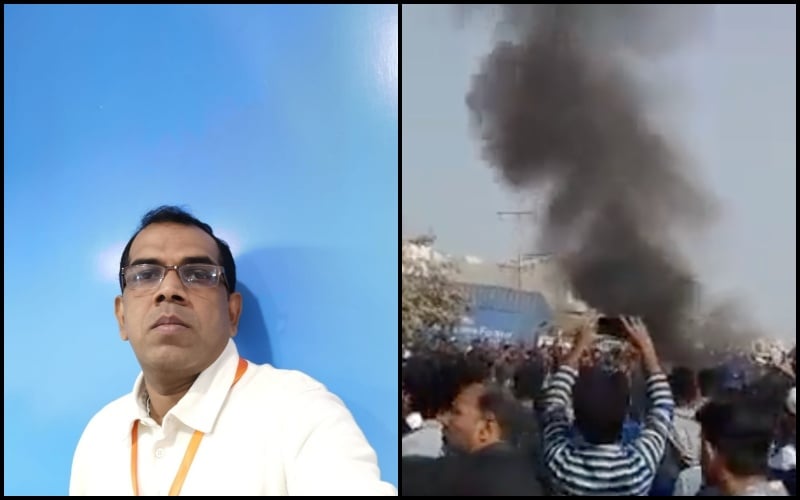 Pakistan has become a den of individuals belonging to minority religions, especially Hindus, Sikhs and Christians, being murdered over charges of “blasphemy”.  Another case has now emerged from Sialkot, Pakistan, where a Sri Lankan man Priyantha Kumara has been tortured and burnt to death by an irate Fanatics mob that believed rumours of blasphemy.

A video of the horrifying incident has gone viral on Social Media.

The GM of Rajko Industries in Sialkot, who was a Sri Lankan, was killed and set on fire by the people of the factory. The G.M allegedly tore the poster of Holy Prophet (PBUH) and threw it in the trash.
May allah enlightened us the path of Hidayat 🤲#Sialkot #Rajkoindustries pic.twitter.com/EKIUTWJvIC

Tweet by one Baltistan Times says, “The GM of Rajko Industries in Sialkot, who was a Sri Lankan, was killed and set on fire by the people of the factory. The G.M allegedly tore the poster of Holy Prophet (PBUH) and threw it in the trash”.

The incident took place on Wazirabad Road in Sialkot, where reportedly the workers of private factories attacked the export manager of a factory and burnt his body after killing him.

The victim who has been murdered by Pakistani Islamists was the GM of Rajko Industries in Sialkot. He was originally from Sri Lanka.

Rajko is the company that had made the cricket jersey and gear for the Pakistan T20 team for World Cup.

Punjab Chief Minister Usman Buzdar took notice of the murder, terming it as a “very tragic incident”, while the spokesperson for Sialkot police said details would be shared with the media after initial investigation.

“Every aspect of the incident should be investigated and a report should be submitted. Action should be taken against those who take the law into their own hands,” the chief minister said.

The police has reportedly said that the incident would be investigated and culprits would be brought to book.

Interestingly, reports indicate that he had torn the “poster of the Prophet”. There were questions raised as to how he could have torn the poster of the Prophet of Islam when Islam forbids people from manifesting the prophet in any form, given that Islam is against idolatry.

It is possible that they meant a poster with Prophet Muhammad’s name written in calligraphy. The following poster being sold on Flipkart is one such example.

However, given the penchant of Islamists to kill people over mere rumours and on occasion, even create the rumours just so they can lynch and murder Hindus, one can never be sure if the incident of Blasphemy actually took place.

A Sialkot resident took to Facebook to say that the victim had thrown a paper accidentally in the bin and that there was no deliberate blasphemy in the case.