Maharashtra was in turmoil last week after several Muslim organisations called for protests based on the fake news of mosques being vandalised in Tripura. Many cities, including Malegaon, Amravati and Nanded saw violence as a rampaging crowd of Muslim groups flocked to the streets in opposition to vandalization that never happened. 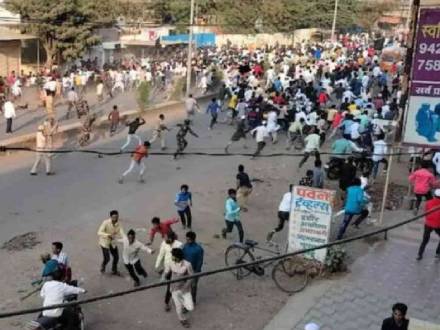 Startling new facts have emerged in the investigation launched by the Malegaon police in connection with the violence and disruption caused under the pretext of carrying out demonstrations. As per a report published in TV 9 Marathi, the violence witnessed in Malegaon was not a spontaneous eruption of passion but a well-thought-out plan to foment trouble. In fact, the preliminary reports suggest that even political workers were involved in stoking tensions that led to acts of arson, vandalism and plundering.

The police officials are sifting through CCTV footage now to identity the rabble-rousers and make arrests in the case. Already, NCP corporator Ayaz Hulchul has been arrested by Malegaon police in connection with Friday violence. He is reportedly charged for inciting communal tensions by sharing an offensive video clip on social media that had instantly gone viral. The video was widely circulated on the internet, accusing the Tripura government of failing to stop the alleged vandalism.

Police have registered five separate cases in the Malegaon violence case. It has launched a search for the suspects, including those responsible for sharing offensive videos, pelting stones, inciting people and hatching a conspiracy to cause violence. Many of the suspects are political workers, including former corporators. The accused also include two existing corporators, two former corporators and the son of a former corporator. Most importantly, a brother-in-law of a big political leader is also a suspect in the case. It is understood that the police are searching for the two existing corporators along with him.

On Friday last week, Raza Academy and All India Sunni Jamiat Ulema had called for a shutdown in protest against the alleged vandalisation of mosques in Tripura. A rally was organised, which turned violent, resulting in the destruction of several shops, properties worth millions of rupees set on fire and damaged. A case has been registered against the organisers in this regard. However, they have not been arrested yet.