The Allama Iqbal poster made for the one-day webinar organized on November 9, 2021, on the occasion of Urdu Day at the Urdu Department of Banaras Hindu University (BHU), has created ruckus at the university. 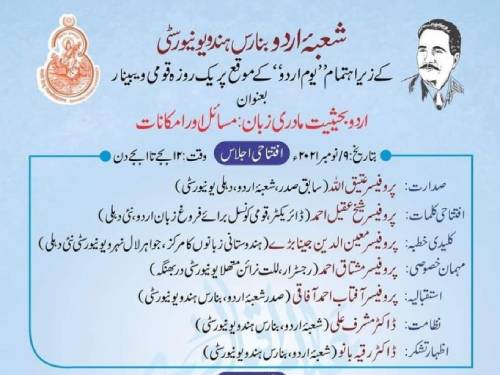 As per tradition, all BHU events have a picture of the founder, Bharat Ratna Mahamana Madan Mohan Malaviya and any ceremony begins with his tribute and singing of the Kulgeet, the university song. But on the poster of the seminar of the Urdu Department of the Faculty of Arts, the picture of Mahamana was replaced by the picture of Allama Iqbal, a noted Islamist who was one of the leading proponents of the Two-Nation Theory and had contributed to the creation of Pakistan.

Students of the Faculty of Arts told OpIndia, “As soon as we received the information, we contacted the Dean of the Faculty of Arts, Prof. Vijay Bahadur Singh and registered a protest. The Kulgeet of BHU was not even sung at the beginning of the Urdu Day celebration in the Urdu Department. Whereas according to the rules, it is mandatory to sing the Kulgeet of the university at the beginning of every program.”

The students have termed the incident of replacing the picture of Mahamana and putting up the picture of Allama Iqbal, a supporter of India-Pakistan two-nation by the professors of the Urdu department as very unfortunate. The students have also demanded immediate action from the university administration against the guilty and stated that they will hold protests if the administration fails to take action.

Notably, as soon as the matter was noticed, a large number of students including research students of Faculty of Social Sciences Patanjali Pandey and Gunjesh Gautam Jha, Ashirwad Dubey and Shubham Mishra gathered in the Faculty of Arts and protested. The students demanded immediate action against the act and gave a complaint letter to Dean Vijay Bahadur Singh.

The dean had shared a tweet saying, “Urdu Department of Faculty of Arts, BHU is organizing a webinar as per the details given in the poster. Sincere apologies for the inadvertent mistake in the earlier poster that went viral on social media.

Urdu Department, Faculty of Arts, #BHU, is organizing a webinar as per the details given in the poster. Sincerest apologies for the inadvertent mistake in the earlier poster that went viral on social media.@bhupro @VCofficeBHU pic.twitter.com/loGvXe99IU

It is worth noting that after the protests of the students in the matter, the poster of Allama Iqbal was later removed. OpIndia also sought to know more about the incident from HOD Aftab Ahmed of the Urdu Department, but he could not be contacted.