BJP’s Bhopal MP Sadhvi Pragya Singh Thakur has kicked off a fresh debate over the use of loudspeakers at mosques to offer azaan 5 times a day. 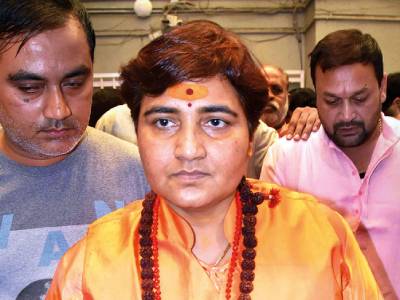 Pragya Singh said that every morning at five o’clock a loud sound starts and this keeps going on which disturbs everybody’s sleep. There are patients suffering from sleeplessness. But when they want to sleep in the morning the sound disturbs them. Sleep disturbances can cause a rise in blood pressure for some patients, she added.

“Sadhus and saints start their meditation from four o’clock. Even our morning prayer starts at this time. But nobody cares and the sound (namaz) keeps blaring in our ears. But if we put the loudspeaker, they (Muslims) have problems. The objection is that they can’t listen to the prayers of other religions because this is prohibited in Islam. Hindus care for the sentiments of other religions because we give respect to all religions,” she said.

State general secretary of Madhya Pradesh Congress KK Mishra objected to the statement of Pragya Singh stating that she is an accused in a criminal case. Congress spokesperson JP Dhanopia accused the MP of creating communal disturbances. Notably, in January last year, the then Congress government had tried to remove a loudspeaker from an ancient Shiva temple in Sihor district in the name of complying with the Supreme Court order.

About a fortnight back Pragya Singh had brought to light the issue of the campus of Bhopal Kendriya Vidyala being used to offer namaz after she made a surprise inspection at the school on a Friday and found around 300 people offering namaz inside the school campus. There were complaints that some Muslim groups enter the school premises from back gates and use the school grounds to offer Namaz.

The MP had spoken with the local authorities and school administration, asking when the parents of students are not allowed inside the campus, how can the school allow people to come and offer namaz inside the school premises.