Two weeks after Pakistan was retained in the FATF grey list, the Lahore High Court (LHC) has acquitted 6 terrorists in a case pertaining to terror financing. The terrorists, associated with Hafiz Saeed’s Jamatud Dawa (JuD), were earlier convicted by an anti-terrorism court. 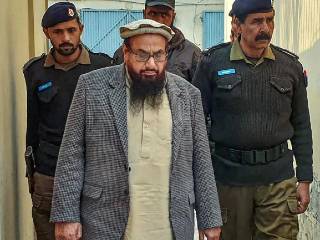 As per reports, the terrorists were identified as Prof Malik Zafar Iqbal, Nasrullah, Samiullah, Yahya Mujahid, Hafiz Abdul Rehman Makki and Umar Bahadur. With the exception of Makki, all 5 terrorists were sentenced to 9 years imprisonment. Hafiz Abdul Rehman Makki was sentenced to only 6 months of jail term. All of them were earlier charged by the Counter-Terrorism Department under the Anti-Terrorism Act Sections 11-F, 11-H(2), 11-I(2), 11-J(2), and 11-N.

However, a 2- Judge Division Bench of the Lahore High Court comprising of Justices Muhammed Ameer Bhatti and Tariq Saleem Sheikh claimed that there was a miscarriage of justice at the trial court level. The advocate for the terrorists also added that the prosecutors failed to prove charges against the 6 terrorists beyond reasonable doubt. He also claimed that the 6 terrorists were members of the Al-Anfaal Trust and it has no connection to the banned Lashkar-e-Toiba. The advocate also alleged that there was no evidence to suggest they were connected to LeT.

Besides, he added that the 6 terrorists had not been members of the Al-Anfal Trust since the mid-2000s. While noting the arguments of the defence, the Lahore High Court ruled in the favour of the 6 JUD terrorists. It stated, “In his cross-examination Inspector Muhammad Khalid (prosecution witness) conceded that the local police station never received any complaint against the appellants and even during his investigation nobody from the general public brought anything to his notice which could expose their malefactions. The appellants cannot be convicted for the mere reason that LeT or the trust have been proscribed.”

Pakistan removes names of terrorists from watchlist to evade the scrutiny

Earlier in April, a New York-based Artificial Intelligence startup had revealed that Pakistan has silently removed the names of almost 4,000 terrorists from its terror watchlist. The removed names include LeT leader and Mumbai attack mastermind Zakir ur Rehman Lakhvi and many others.

The Artificial Intelligence startup Castellum has revealed quoting the Financial Action task Force that in October 2018 the country’s terror watchlist had 7,600 names. As the work of AI is to add new data sources, it noted that between March 9 and 27 data showed that Pakistan removed 1,069 names from the Proscribed person List and all those names appeared on the country’s denotified list.

After 27 March, 800 names were also removed and eventually 3800 names have been placed in the denotified list till so far without any explanation or notification to the public. Several of the names removed are the aliases of designated terrorists listed by the US or the United Nations.  Interestingly, ahead of this year’s plenary session, FATF has strongly noted that the sudden disappearance of the names of more than 4,000 terrorists from its original list of 7,600 under Schedule IV of its Anti-Terrorism Act.

Last year, the United Nations committee had allowed terrorist Hafiz Saeed to use his bank account for ‘basic expenses’ to help his family. In its letter, the UN Committee said that with no objections being raised to Pakistan’s request for Hafiz Saeed’s basic expenses, the Chair has approved the appeal. Reportedly, Hafiz Saeed’s bank accounts were frozen by the Pakistani government complying with the UNSC resolution. Later, Pakistan had requested the UN to let Hafiz Saeed withdraw PKR 1,50,000 (approximately $1,000) to cover necessary basic living expenses for him and his family.