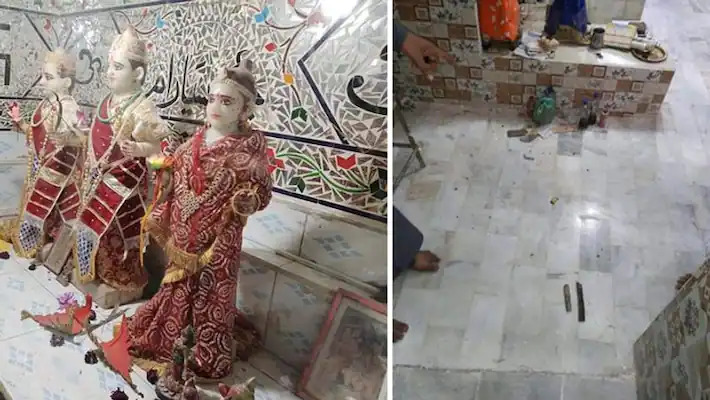 Targetting a Hindu temple in Pakistan’s Sindh, unidentified thieves have desecrated Hanuman Devi Mata Mandir in Kotri near Hyderabad and took away jewellery and cash worth thousands of rupees, reported local media.

An FIR under section 295 and other sections of the Pakistan Penal Code was lodged at the Kotri police station stated the thieves entered the Hanuman Devi Mata Mandir at the bank of the Indus River on Thursday, reported Samaa TV.

The incident is not the first act of theft at a mandir in Kotri. In January this year, thieves stole gold jewellery and a crown worth hundreds of thousands of rupees from the Guru Balimak Temple.

Sindh CM House released a statement over the incident stating that Chief Minister Murad Ali Shah has been briefed about the matter.

“The thief entered through the roof of the mandir and stole necklaces from the moortis. The moortis [carved figures of the Hindu gods] were stored in a glass frame and were wearing two necklaces made of silver,” the statement read.

“The two necklaces are reported to be worth Rs 40,000. The thief also stole Rs 20,000 cash from the donation box,” Samaa TV quoted Sindh CM House statement.

The CM House spoke about a single thief but locals have said that multiple people entered the temple and desecrated it at night, the Pakistani publication reported.

Thieves have also removed and taken away the crown from the idol of the Devi Mata, the locals said.

The FIR has been registered under three sections of the Pakistan Penal Code: 295 about injuring or defiling a place of worship, with intent to insult the religion of any class; 297 about trespassing on burial places; and 380 about theft in a dwelling house, according to Samaa TV.