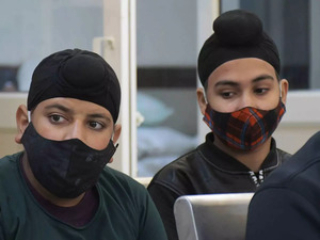 As the security scenario in Afghanistan continues to deteriorate, Sikhs — a community that was already in a dire situation before the collapse of the government — practically have to make a choice between options of “converting to Sunni Islam or run away” from Afghanistan, said a report.

The community, which once numbered in the tens of thousands, has been ruined and devastated by years of emigration and death, driven by both systemic discrimination and an uptick in fanatical religious violence in Afghanistan, International Forum For Rights and Security (IFFRAS) said.

The larger numbers of Sikhs live in Kabul while some in the provinces of Ghazni and Nangarhar.

On October 5, 15 to 20 terrorists entered Gurdwara (Sikh temple) and tied up the guards. The attack happened in the Kart-e-Parwan District of Kabul. Sikhs in Afghanistan often experience such attacks and violence in the country.

There were many anti-Sikh violent attacks in Afghanistan.

Last year in June an Afghan Sikh leader was kidnapped, reportedly by ‘terrorists’. No further details about the case were disclosed by the sources.

Another Sikh man was kidnapped and killed in Kabul in March 2019. Later, Afghanistan’s police had arrested two suspects. While in Kandahar, another, some unknown gunmen had shot another Sikh man.

Sikhs have been living in Afghanistan for centuries but for decades even the Afghan government has failed to provide Sikhs adequate housing or reinstate their homes, which has been illegally occupied by their powerful neighbours or warlords during the 1990s. After the recent massacre of the Sikhs by the Taliban in a Gurdwara in Kabul on March 26, 2020, most Afghan Sikhs were leaving for India, said IFFRAS.

Further, the forum highlighted that as the people of the Sikh community don’t fall under the mainstream Sunni sect of Islam, they are either meant to be forcefully converted as Sunni Muslims or killed. The Taliban ‘government’ will never allow diversity to thrive in the Afghan state and society. The strictest form of Islamic code with tribal customs will result in the annihilation of all the minority sects of Afghanistan, including Sikhs.