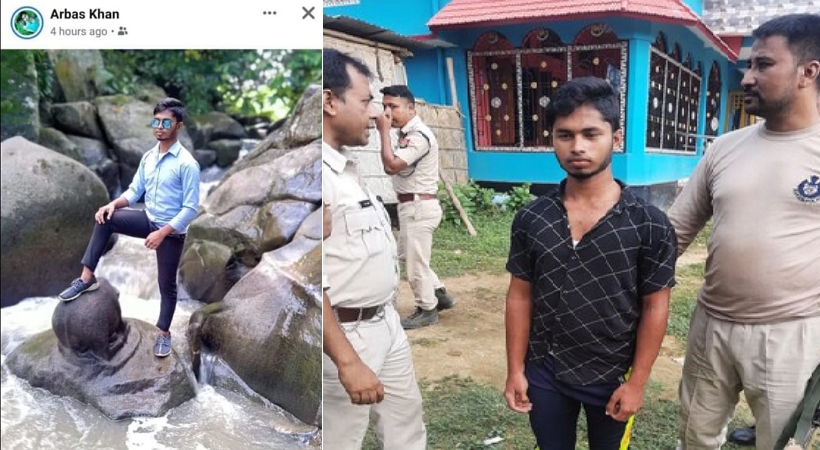 An incident of Hindu idol desecration has been reported from West Karbi Anglong district in Assam. In what appeared as a wanton attempt to stoke communal tensions in the city, a youth named Arbas Khan, uploaded a few pictures on Thursday on social media where he could be seen placing a foot on the head of an ancient idol of Lord Ganesh.

According to reports, the deplorable incident occurred in a religious place in the Tengalangso region of West Karbi Anglong district near Nagaon, Assam, where locals offer prayers to Lord Ganesh. The idol is placed in the midst of a stream named Arlong Kund in Tengalangso, and there is also a temple dedicated to the Hindu deity at that place.

In pictures posted on social media, the accused is seen posing with one of his legs on the head of Lord Ganesh’s stone idol. He is also seen wearing shoes.

After the image appeared on social media, it created outrage among the people in the area. Several local organisations condemned the act and demanded strict action against the youth, including Bajrang Dal and Karbi Students Union. They held a demonstration demanding the arrest of Arbas Khan, where they carried the hard copies of the photo uploaded by the youth.

The members of the Ganesh Mandir committee also condemned the despicable act and approached the Baithalangso police station with a complaint against the youth. Speaking to the local media, one of the Temple committee members stated: “This act of hurting the sentiments of Hindus cannot be tolerated and will take legal action against him.”

A member of the temple committee stated that they were not opposed to individuals of different faiths visiting the site. He went on to say that many Muslims, Christians, and people of many faiths come to the place for picnics. That is not a problem for them. He stated that he, too, has visited numerous mosques and churches, as well as religious festivals such as Eid, but that such unethical behaviour has harmed Hindu religious sentiments, which will not be condoned.

Following the outrage and the complaint, the police had launched a hunt for Arbas Khan alias Ghulam Abbas Patowari, and arrested him on Friday from Kachua village. Hamren SP Ajagwran Basumatary had ordered a hunt for the youth, and he was arrested by a joint operation of cops from Nagaon, Hojai and Karbi Anglong. The cops have learnt that he had visited the place along with three other friends, where he got himself photographed placing his foot on the idol.

He was traced after finding out that he belongs to Bherbheri village in Jamunamukh in the neighbouring Hojai district. The Jamunamukh police visited his home from where his whereabouts in Karbi Anglong district was obtained, leading to his arrest. Arbas Khan is being questioned by the police in connection with the case.