Memorandum submitted to the Government at 137 places !

Various pro-Hindu organisations staged demonstrations in India and Bangladesh against jihadi attacks on Hindus in Bangladesh. Stringent action should be taken against jihadi attackers, and minority Hindus from Bangladesh should be protected were the demands made during these demonstrations staged by Hindus from 15 States of India viz. New Delhi, Maharashtra, Karnataka, Goa, Haryana, Rajasthan, Madhya Pradesh, Uttar Pradesh, Bihar, Jharkhand, West Bengal, Meghalaya, Assam, Tripura, and Odisha. Memorandums were sent to Prime Minister Narendra Modi and External Affairs Minister Jaishankar directly at 25 places and online from 112 places. Around 40 pro-Hindu organisations from all over India including Hindu Janajagruti Samiti (HJS) and devout Hindus participated in the demonstrations.

Strong condemnation of attacks on Bangladeshi Hindus even on ‘Twitter’!

The attacks on Bangladeshi Hindus by jihadis have been condemned on large scale even on ‘Twitter’. Hindus from India and Bangladesh spontaneously joined and thousands of Hindus ‘twitted’ on #SaveBangladeshiHindus.

It is necessary to raise a voice to condemn atrocities against Hindus in Bangladesh at an international level ! – Shri. Tathagat Roy, the former Governor, Tripura, and Meghalaya

The region now known as Bangladesh had 29% of the Hindu population in 1941 but it had come down to 22% in 1951. In 1971, till the creation of Bangladesh, the Hindu population declined to 18% and now, only 8% of Hindus are left in Bangladesh. Where did all other Hindus go? In 1971, after the creation of Bangladesh, Hindus felt that their oppression would stop, but it didn’t happen that way. There is nothing new in the recent attacks on Hindus during Navaratri in Bangladesh. Hindus have been constantly attacked on some pretext or the other. For the security of Hindus in Bangladesh, it is necessary to raise a voice at the international level against such attacks on Hindus. The Indian Government should also bring diplomatic pressure on Bangladesh for prevention of attacks on Hindus, appealed Shri. Tathagat Roy, the former Governor of Tripura and Meghalaya during the special online discussions held by Hindu Janajagruti Samiti (HJS) on the topic of ‘Jihadi attack on Bangladeshi Hindus!’

Shri. Ramesh Shinde, the national spokesperson of HJS said that Hindus should lodge complaints with the High Commission of Bangladesh in India against the genocide of Hindus in that country; stage agitations to condemn the attack and create political pressure. The representatives of the United Nations, who visit Kashmir for Muslims, are most indifferent towards atrocities against Hindus in Bangladesh. Indian Government should send its delegation for conducting an impartial inquiry into atrocities against Hindus and their report should be published for people to know. Bangladeshi Muslims who have illegally occupied 6652 sq. kms. i.e. a large part of the land in Assam, should be driven out. Advocate Pujya Ravindra Ghosh of ‘Bangladesh Minority Watch’, Arati Agrawal, the Director of ‘Ishitva Foundation’, and other eminent personalities explained the pathetic condition of Hindus in Bangladesh.

Protest by Hindu Janajagruti Samiti at various places in India 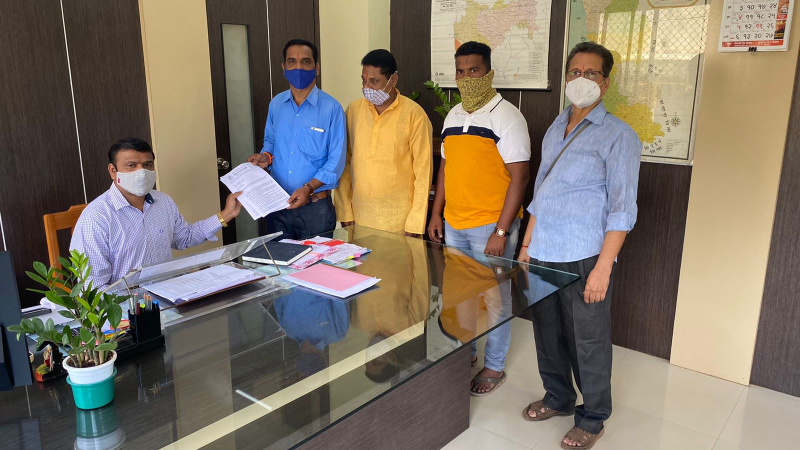 Kagal (Maharashtra) : On 20th October 2021, Hindu Janajagruti Samiti (HJS) submitted a memorandum to Tehsildar Shilpa Thokade of Kagal. There was a demand to take stringent action against the fanatics who were involved in attacks on hundreds of Navaratri pandals and ISKCON Temple, and who carried out armed attacks on Hindus leading to the carnage in Bangladesh. Mr Rajendra Bhoje and Mr Raju Mete of Shri Shivapratishthan Hindustan; Mr. Vinayak Awale of Bajrang Dal; Mr Kiran Kulkarni, a Hindu activist, and Mr Babasaheb Bhopale of HJS were present on the occasion.

Belagavi, Karnataka : Indian Government and Hindus should strongly condemn the incidents happening in Bangladesh and participate in the demonstrations staged to protest such incidents. We demand that strict action should be taken against the attackers. The above appeal was made by Nagendradas Prabhu of ISKCON. Hindu Janajagruti Samiti (HJS) had staged demonstrations at ‘Dharmaveer Chhatrapati Shri Sambhaji Maharaj Chowk’ on 22nd October 21, demanding action against religious fanatics for attacking Hindus and ISKCON temple during the Navaratri festival. Prabhu addressed the demonstrators. Mr Rushikesh Gurjar of HJS also expressed his views. A memorandum was submitted to the District Collector’s office after the demonstrations.

Nandurbar, Maharashtra : Hindu Janajagruti Samiti (HJS) submitted a memorandum to the local administration and demanded action against the fanatics who had attacked hundreds of ‘Durga-puja pandals’ during Navaratri festival in Bangladesh; as well as against the armed attacks on Hindus in that country. The memorandum was addressed to the Prime Minister. The memorandum was handed over to the Dy District Collector, Sudhir Khande on 20th October 21 in the presence of Madhavdas Sundar Das, the District Chief of ISKCON for Nandurbar, Bhadrasen Das, Nikhil Khalane, devout Hindus Dheeraj Chaudhari, Jitendra Marathe, and Prof. Dr Satish Bagul, and Rahul Marathe of HJS.

Memorandum submitted by HJS at Ajra