The news of Hindu temples and homes being set on fire in Bangladesh by Islamists garnered global attention with everyone from the government to media to spiritual leaders condemning the systematic religious attack. 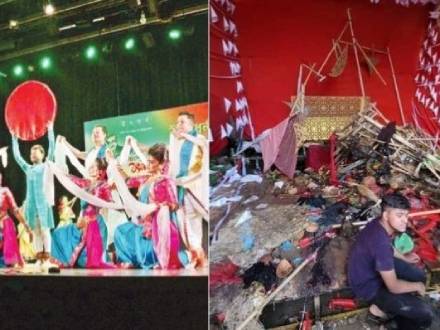 However, just before the Hindus of Bangladesh were rendered homeless, the Bangladesh Shilpakala Academy in the capital city of Dhaka had concluded the ‘Ganga-Jamuna Cultural Festival 2021.’

What is Ganga-Jamuna Cultural Festival?

“Aiming at consolidating the harmony between Bangladesh and India through cultural exchange, Indian and Bangladesh Committee of Ganga-Jamuna Sangskritik Utsab Parshad have jointly been organizing the 10-day festival,” read a 2019 report on Ganga-Jamuna Cultural Festival.

Interestingly, the theme of the Ganga-Jamuna festival this year revolved around the ‘golden jubilee of independence of Bangladesh and the birth centenary of the country’s founding president Sheikh Mujibur Rahman.’

State minister for cultural affairs KM Khalid while speaking at the inauguration had said, “..From our Ministry of Cultural Affairs, we want to sponsor active cultural organizations. To ensure adequate support to the appropriate organizations, we will prepare a list and hand it over to cultural icons after proper evaluation.”

Ironically, just two days after the cultural program came to an end, reports of Durga Puja pandal vandalism over an alleged rumor of ‘desecration of Quran by Hindus’ started to surface in the media.

A district official himself had confirmed, “The miscreants took some pictures of this and ran away. Within a few hours, using Facebook, the propaganda spread like wildfire with the provocative pictures.”

However, the Islamic extremist mob put on fire 101 Hindu temples and Pandals and 181 houses and shops in a systematic attack that went on for 10 days leaving seven dead. The violence was carried and justified basis a stray false post on Facebook.

Several calls for help and requests to the government and Muslim community by the Hindus in Bangladesh fell on deaf ears.

It has now come to light that the one to trigger violence against Hindus in Bangladesh is one Iqbal Hossain.

35-years-old Iqbal Hossain, son of Nur Ahmed Alam from Sujanagar area of Comilla, had reportedly placed the Quran at a Durga Puja mandap at Nanua Dighir Par in Comilla on October 13th, triggering a series of communal violence against minority Hindus in the country.