On Saturday (October 16), the Baikampady Karkera Moolasthana Jarandaya Daivastana and Naga Brahma Peeta were vandalised by miscreants at late night in Mangaluru in Karnataka, reported Daijiworld. 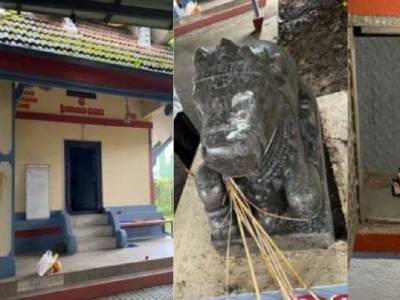 As per reports, the matter came to light when devotees went to offer prayers at the temple. Daijiworld reported that the accused had damaged the idol of Naga and the stone image of Nandi. Besides, the miscreants broke open the cupboard and threw all the belongings of the Davisthana. At the same time, the gates of the temple were also destroyed.

The devotees alerted the temple administrative committee, who then called in the cops. On receiving information, the police rushed to the spot and began an investigation into the matter. Following the temple desecration, the locals have demanded security for the religious site. Police suspects it was a case of attempted robbery. However, this is not the first time that such an incident has come to light.