On Friday (October 15), about 2000 radical Islamists clashed with the police during a protest against the alleged blasphemy committed by the minority Hindu population, reported Associated Press. The incident took place in Bangladesh’s capital city of Dhaka. 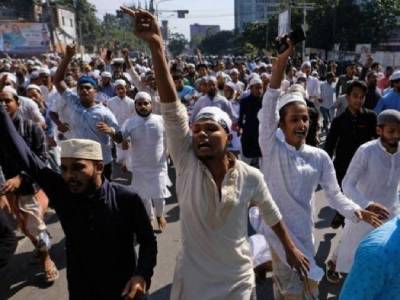 As per reports, the frenzied mob of protestors took to the streets after offering the Jumma Namaz (Friday prayers) at the Baitul Mukarram mosque. They began chanting anti-India slogans and accused Bangladeshi Prime Minister Sheikh Hasina of being hands in gloves with India. The Islamists resorted to stone-pelting and tried to break through the police barricades. In a bid to control the law and order situation, the security forces resorted to lathi-charge and firing tear gas shells.

Deputy Commissioner (Dhaka Metropolitan Police) Sajjad Hossain informed that the radical Islamists attacked the cops, following which three were detained for interrogation. While speaking to BenarNews, another deputy Commissioner Sazzadur Rahman stated, “Over 2,000 Muslim devotees brought out a procession after Jummah prayers.” He said that a total of 5 people were arrested. As per BenarNews, the Islamists threw sandals and bricks at the police, who then fired rubber bullets and tear gas in return.